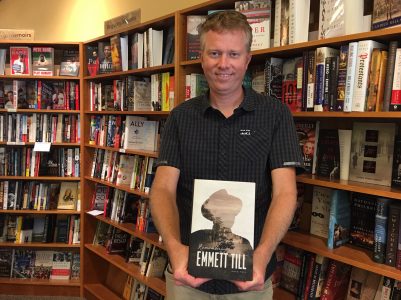 David Tell, a KU professor in communication studies, whose research focuses on issues of race, memory and place, holds a copy of his book "Remembering Emmett Till" at the Signs of Life Bookstore,722 Massachusetts St, on Sept. 3, 2019.

It has been 64 years since Emmett Till was brutally murdered, and a University of Kansas professor is determined to let people know how the story of Till’s horrific killing has shifted over time.

Dave Tell’s book, “Remembering Emmett Till,” published by the University of Chicago Press, was released this past spring. Tell believes his book is different from most books on the subject because he begins long after the 14-year-old black teenager was murdered, his body attached by barbed wire to a cotton-gin fan and sunk in the river — punishment for allegedly whistling at a white woman. Tell begins his book after the murderers were acquitted by an all-white, all-male jury in 1955 — after the crime became a catalyst for the civil rights movement.

“My book picks up the story in 1956, and it gets going in 2005, which was the first time the state of Mississippi spent money on Emmett Till,” he said.

“Since then the state has spent well over $5 million in Emmett Till commemoration, and my book traces the receipts, who spent the money and how they changed the story of Emmett Till,” Tell said.

Tell, who has been teaching communications at KU since 2007, recently spoke to the Journal-World about the book, explaining how his research focused on many of the events from that tragedy that changed over time. For example, Tell explained how one journalist altered the facts of the murder by moving the murder site 19 miles and eliminating many of the participants in the murder from his story.

Tell happened upon the first falsehood back in 2002 while writing his dissertation on “The History of Public Confession” while a graduate student at Penn State.

“I remember very clearly, I Googled ‘public confession America,’ and one of the hits that came up was the confession of the murder of Emmett Till, which ran in Look magazine, January 1956, five months after the trial.” The article, “The Shocking Story of Approved Killing in Mississippi,” was written by William Bradford Huie.

Look magazine would not agree to publish the story unless Huie had a consent and release form from everyone involved, Tell said. Huie knew at least four people were involved in the murder, but he told his editor there were only two: J.W. Milam and Roy Bryant, the husband of the woman Till had allegedly whistled at, who had both been tried and acquitted.

Curious, Tell began researching the papers of William Bradford Huie at Ohio State University. Tell discovered the consent and release forms signed by Milam and Bryant. Look magazine paid the murderers $3,150 to split between them for their confessions.

“Though they had been acquitted in a court of law, he paid them for their confessions,” Tell said. “He could only get signed releases from two of the murderers. But there were at least five white men and two black men involved in Till’s death.”

“To this day 99.9% of the people who know the story think only two men killed him, but the reason they think that is because Look said there were two people. And the reason Look said there were two people is because they could only get two of the release forms signed,” Tell said. “So they shrunk the murder party to match the release forms they could get.”

The research became a part of Tell’s dissertation. Once it was published in 2008 and later in 2012, it started circulating and gained the attention of activists in the Mississippi Delta.

In 2009 a group of local citizens, with the Emmett Till Memorial Commission, began putting up signs at different locations, including at the site where Till’s body was pulled from the river; at Bryant’s Grocery & Meat Market in Money, Miss., where Till allegedly whistled at Carolyn Bryant; and at the Sumner Courthouse, where the murder trial took place. But the signs quickly were vandalized and riddled with bullets. The group continued to replace the signs, which would be damaged again and again.

By 2014, the group became fed up with the vandalism and brought together a group of people to discuss what they could do. Tell was invited because of his research.

Since then he has become deeply immersed in the group, making multiple trips to the Mississippi Delta, serving as a consultant and grant writer for the Emmett Till Memorial Commission.

His involvement, Tell said, led to the writing of “Remembering Emmett Till.”

He also helped the group come up with a way to deal with the repeated vandalism, by creating a free app called the “Emmett Till Memory Project.” The virtual tour – including pictures, documents and maps — went live in August. It can be found on Google Play or the App Store.

“It does everything the original signs do, except online you can’t shoot it,” Tell said. On Sept. 25, Tell will be in Chicago meeting with Till family members to add five more sites to the app.

The app doesn’t mean the commission is giving up on signage. They have constructed a bulletproof sign made out of reinforced steel and weighing 500 pounds, designed to repel a rifle round. It will be covered with clear plexiglass to keep bullets from ricocheting off the sign. The cost of the sign was donated. Tell wrote the historical description on the sign. It will be unveiled Oct. 18 at the site where Till’s body was pulled from the Tallahatchie River.

However, Tell said none of the commission believes the sign is going to solve their problems. If anything, he said, “It may just be a bigger target.”