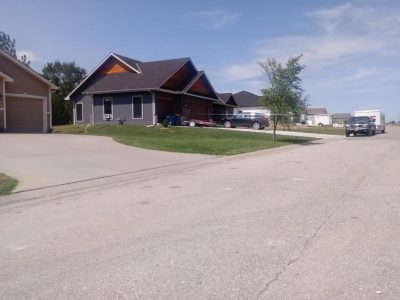 Through an agreement wiht a local developer, students in the Eudora-De Soto Vocational Training Center's construction program built this home in Eudora's Shadow Ridge subdivision during the 2018-2019 school year.Money the school district made through its share of the value of the home was used to purchase a lot on which the students in the program will build a home this year.

Seven Eudora High School students installed a fence Friday along the property line of a newly constructed house in Eudora’s Shadow Ridge subdivision, talking about the task at hand above the noise of earth-moving equipment across the street.

The seven students are enrolled in this year’s afternoon session of the Eudora-De Soto Technical Education Center’s construction program. The newly constructed $270,000 house for which they were building the fence was built by students enrolled in the program’s inaugural 2018-2019 school year, said Gus Andrews, the program’s instructor. The fence is the last work the students will do at that completed house before moving on to this year’s project.

“They are digging the basement now across the street,” he said. “We’ll be over there the rest of the year.”

The Eudora school board approved in July the purchase of the lot on which this year’s home will be built for $45,000. Eudora Superintendent Steve Splichal explained the money came from Alcove Development LLC’s purchase of the house that the students built last year.

Eudora High School Principal Ron Abel said Alcove Development, the developer of the Shadow Ridge subdivision adjacent to the school, established a financial agreement with the school district that allows the developer and contractors to recoup their investments in the houses the students build through the value of the homes, while providing the school district money in excess of those investment costs. The district then reinvests its share back into the construction program, primarily in the purchase of a lot for the next year’s project.

It’s a win-win arrangement that allows the vocational center to offer a program that gives students hands-on training in the construction trades and provides contractors a talent pool of skilled employees, Abel said.

The program has grown from eight students its first year to 18 this year, Abel said. The students can enroll in either morning or afternoon sessions, both of which take three hours of the high school’s seven-hour daily schedule, he said.

Enrollment in the program grew significantly in its second year, and there is the possibility of further growth, Abel said.

“No students from the De Soto district chose to enroll in the program this year, but they are certainly welcome to,” he said. “We do have some kids from Wellsville now, and we hope to get kids from Baldwin.”

Weather permitting, the program’s students should start working “shoulder to shoulder” with those of a contractor hired to install the basement in this year’s $360,000 house, Andrews said. They will also work with contractors hired for such jobs as sheetrocking, plumbing and installation of heating and air conditioning, he said. However, the students will under his instruction take on such tasks as framing the house, install windows, doors, cabinets and complete other elements of finish carpentry and paint the home inside and out, he said.

Of the eight students in the program last year, half are now working in the trades and half enrolled in college, Andrews said.

“Even the ones in college worked in construction to earn money this summer,” he said.

As he helped with the fence Friday, Eudora High School junior Nate Criqui said he planned to go to college but still considered the program vocational because he is interested in becoming a contractor or developer. The program appeals to him because it gives him a well-rounded introduction in the building trades, but it also includes such things as OSHA training and business skills in estimating project costs, he said.

“What most interests me is learning the whole construction process,” he said.