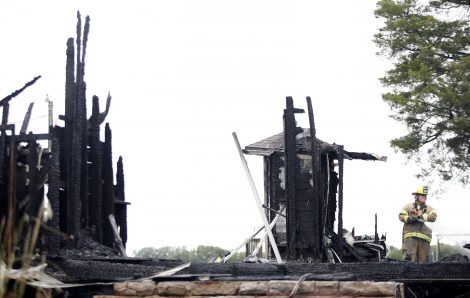 A firefighter hoses down hot spots in the debris of the Clinton Presbyterian Church, 588 North 1200 Road, after it caught fire and burned down early Friday morning, Aug. 30, 2019.

Investigators have determined that a lightning strike was the cause of the fire that destroyed the Clinton Presbyterian Church Friday morning.

“It was natural causes,” said Jill Bronaugh, a spokeswoman at the Office of the State Fire Marshal in Topeka.

The estimated damage to the century-old building in rural Douglas County was $1 million, Bronaugh said.

Firefighters were on the scene at 4:40 a.m. Friday at 588 North 1200 Road, near Clinton Township on the west side of Clinton Lake. Along with the Office of the State Fire Marshal, investigators with the federal Bureau of Alcohol, Tobacco, Firearms and Explosives were also on scene.

Loren Baldwin, a volunteer firefighter with the Clinton Township Fire Department, previously told the Journal-World that he lived next door to the church and heard a loud boom around 3:30 a.m., which he thought could have been a lightning strike.

“I am sure we will,” he told the Journal-World Wednesday.

Sunday, the congregation held its service at the Wakarusa River Valley Heritage Museum, 716 North 1190 Road. However, upcoming services will be in the Clinton Township Hall, 1177 East 604 Road.

Following Friday’s fire, the church has received an outpouring of support from a broad area, Thomas said.

“Even an architect has emailed to offer help however we need,” he said. ” A neighbor with a backhoe and someone with a skid loader both have come to help clear debris, and neither of them goes to our church.”