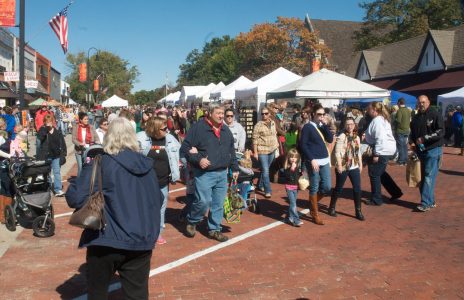 Attendees at a recent Maple Leaf Festival crowd a downtown Baldwin City street shortly after the end of the annual parade.

Baldwin City has spent the last week putting on its festival face.

Crews have been placing orange “no parking” placards along downtown streets, as well as portable toilets and ready-to-assemble barricades at key intersections. They’ve marked off the sites for the hundreds of vendors whose wares will be for sale to the more than 30,000 expected visitors Saturday and Sunday to the annual Maple Leaf Festival.

Founded in 1958, Maple Leaf has grown to be one of the largest fall festivals in the state.

Donna Curran, Maple Leaf Committee vendor booth chair, said vendors have claimed all 370 booth spaces that the Maple Leaf Committee has available. In addition, the Baldwin City Business and Professional Women have signed up another 70 vendors for the group’s festival within a festival, which it annually holds in the 600 and 700 blocks of Chapel Street. The booths will be open for business from 9 a.m. to 6 p.m. Saturday and 9 a.m. to 5 p.m. Sunday, she said.

Many of the crafters are longtime regulars of Maple Leaf, with a number offering jewelry, ceramic and Christmas items. The festival tries to stay fresh, however, with newer vendors and items. Among the more notable vendors this year is one who travels from Minnesota to sell maple syrup. Also new this year, Grant Carpentier, a glass blower from Emporia, will have a booth in the Baldwin City Fire Station, 610 High St.

“I’ve attended Maple Leaf the last three years,” he said. “I wanted to have a booth, but haven’t been able to make it work. Now that I do, I hope to be part of the show for many years.”

In addition to the crafts booths, hungry festival visitors will find plenty of vendors serving up traditional festival food of turkey legs, funnel cakes, barbecue, apple cider and more. Curran said 20 food vendors had signed up through the festival, and there will be a vendor food tent at the corner of Chapel and Eighth streets.

Many Baldwin City businesses benefit from the crowds by setting up booths on sidewalks in front of their storefronts. Lori Gardner, owner of the Homestead Kitchen & Bakery, 719 Eighth St., said she would be offering bierocks and chili on the sidewalk, plus lots of pastries inside.

The festival parade, with the theme of “Small Town, Big Charm,” is to start at 11 a.m. downtown.

This year’s parade grand marshal is Sharon Vesecky, owner of Quilter’s Paradise in Baldwin City and member of the Kaw Valley Quilt Club, which has had an annual quilt show in conjunction with the festival for more than four decades. The quilt show will be from 9 a.m. to 6 p.m. Saturday and 10 a.m. to 5 p.m. Sunday at the Baldwin Elementary School Intermediate Center, 100 Bullpup Drive. Vesecky said the show would have a special exhibition of three quilts made by the late Betty Hagerman, who wrote a local newspaper column on quilting.

It will be a busy weekend for Vesecky, whose family will vend treats on the sidewalk in front of her store.

Visitors are encouraged to park in outlying parking lots and ride free buses to and from the festival. Parking will be available at two elementary schools on Baldwin City’s western edge, Baldwin Elementary School Primary Center at 500 Lawrence St. and Baldwin Elementary School Intermediate Center at 100 Bullpup Drive. The Primary Center is a short drive south of U.S. Highway 56 on Lincoln Street. The Intermediate Center is visible from the highway at the intersection of Bullpup Drive. Signage will be posted directing motorists to the park-and-ride locations.