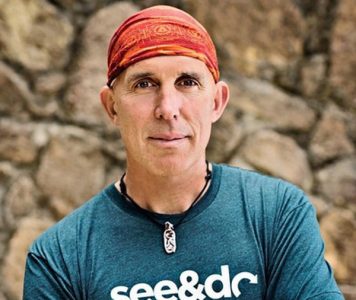 Chris McDougall, author of "Running With Sherman," will be visiting Lawrence on Oct. 13, 2019.

When Chris McDougall arrives in Lawrence to promote his new book “Running with Sherman,” he’ll leave Sherman, the donkey, at home. But, he’ll be running with anyone who wants to join him.

The event begins at 2 p.m. Oct. 13 at Ad Astra Running, 734 Massachusetts St., for an informational meet-and-greet. The easy-paced community run is set for 3 p.m. At 4 p.m. McDougall will end up at the Raven Book Store, 6 E. Seventh St., where he will give a book presentation. Copies of his book will be on sale.

His visit to Lawrence will be one of the first stops on his cross-country tour as he shares the story of the nearly dead donkey that was left at a Pennsylvania farm. His family revived the animal and gave it a purpose: burro racing. That’s where humans and donkeys run side by side over mountains and through streams.

It turned out to be the medicine Sherman needed. Plus, it allowed McDougall the opportunity to explore the psychological and physiological benefits of connecting with animals.

“When Sherman fell in our laps we began to work with him and learned about animals. I learned they are sensitive creatures and we need to pay attention to understand them. People don’t understand how complex animals are,” said McDougall, who spoke by telephone with the Journal-World from his farm in southern Lancaster, Pa.

The book explores the partnership between people and animals. He and his family learned to pay attention, to observe and adapt to what Sherman was doing.

“You are not going to impose your will on a donkey, but if you pay attention and understand, you’ll find out what they want,” McDougall said.

McDougall’s writing career began when he was hired by The Associated Press in Spain and assigned to the AP Bureau in Lisbon, Portugal. He had no experience, but the AP was desperate for a journalist and hired him on the spot, despite the fact that he didn’t speak Portuguese.

He arrived on the job the day a conflict broke out in Angola. Before he knew it, he was learning on the job in sub-Saharan Africa, not only covering Angola but also Mozambique, Rwanda and the Republic of Congo.

Four years later, he returned to the U.S. and began writing for magazines and became fascinated with the limits of human potential.

He traveled through Mexico’s Copper Canyon to meet and live with the Tarahumara Indians, known for their renowned long-distance runners, and wrote his first book, “Born to Run.” It was a life-transforming experience for him.

“It showed we’re capable of much more physically than we realize. We have this misconception we need the right shoes, watch and trainer. But we don’t. We just need to run,” he said.

His second book, “Natural Born Heroes,” takes place on the Greek island of Crete and focuses on the resistance fighters who run through the woods and mountains for years. He examines what made these normal people transform into super athletes. He explains how they are taught to be heroic, resilient and compassionate.

Now, because Sherman showed up, he has his third book, with a donkey as the hero.