After one year with interim leader, Haskell still searching for permanent president 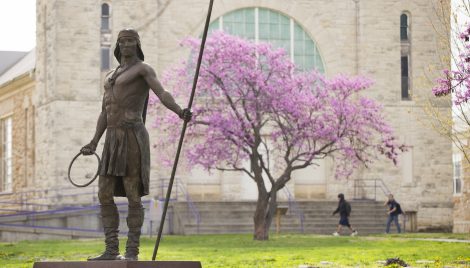 The campus of Haskell Indian Nations University is pictured in April 2015.

Daniel Wildcat is looking forward to getting back to the classroom, but first the interim president of Haskell Indian Nations University must be replaced, and he’s not exactly sure when that will happen.

Wildcat has been serving as interim president since November of 2018, replacing Venida Chenault, who left to work on special assignment for the Bureau of Indian Education just days after a federal report detailed allegations of misconduct at the university. On March 5, it was officially announced that Chenault had accepted an upper-level management position within the BIE and would not return as president.

An initial presidential search that began in the spring garnered close to 80 applicants but failed to produce a strong candidate. In June, the position was to be reopened through Sept. 30, the Journal-World previously reported.

So far this semester, six candidates have interviewed for the position. Two to four more candidates are supposed to interview at Haskell on Thursday and Friday of next week. That was the latest news Wildcat said he heard from the director of the BIE, Tony Dearman. The BIE handles the presidential search and hiring process.

The BIE did not immediately respond to a request for comment.

“All I can tell you is I’m hoping we are going to get some great candidates and get that position filled,” Wildcat said. “Because until we do so, I’m doing the job, and as much as I enjoy that — and I’m glad I can serve in this way — my love has always been in teaching and researching and writing. So I’m looking forward to an opportunity to get back to that.”

When asked if Wildcat originally expected the BIE to find his permanent replacement by the end of this semester, Wildcat said he did. Haskell’s fall semester ends Dec. 13.

Though Haskell is still in the hiring process, Wildcat was happy to say that the strategic planning process has nevertheless been kick-started and that the university seems to have a clear message on its vision and mission.

“That’s the first step,” Wildcat said. Now, “the devil’s in the details.”