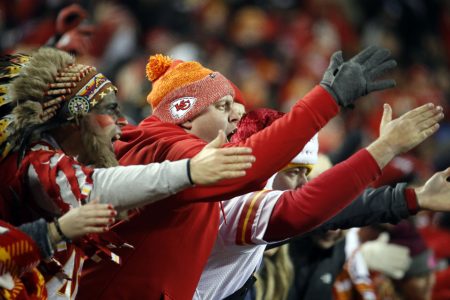 Kansas City Chiefs fans chant and do the "tomahawk chop" during the second half of an NFL game against the Los Angeles Chargers in Kansas City, Mo., Thursday, Dec. 13, 2018.

The interim president of Haskell Indian Nations University noted the university’s opposition to the Kansas City Chiefs name in an open letter on Tuesday, after concerns were raised that a prior message from his office might be construed as an endorsement of the team’s name.

Interim President Daniel Wildcat had previously disseminated a message announcing that Jerry Tuckwin, a Haskell alumnus and former longtime Haskell athletic director, coach and instructor, would be honored with the Lamar Hunt Legacy Seat at the Chiefs game on Sunday.

The Lamar Hunt Legacy Seat is new this year in honor of the team’s 60th season. Each game, the Chiefs choose an honoree who represents the spirit of Hunt.

“We are proud that Mr. Jerry Tuckwin is the first Indigenous recipient of this recognition and want to acknowledge the incredible positive contributions he has made and continues to make at Haskell,” Wildcat wrote in his Tuesday letter. “I share the opinion that Jerry Tuckwin deserves recognition for his service to the Haskell and Lawrence community.

“However, concerns have been raised by Haskell students, staff and the larger Indigenous community that my office’s congratulation and announcement of Mr. Tuckwin’s receipt of the Lamar Hunt Legacy Seat Award might be construed as an endorsement of the ‘Chiefs’ name and the associated fan behavior that many Indigenous People on our campus and across the United States find disrespectful.”

Haskell does not endorse the use of the name “Chiefs,” Wildcat continued.

“Regardless of fan intent, many of the First Peoples of this land find particularly offensive and disrespectful the Kansas City football team fans’ ‘tomahawk chop’ and other behavior such as the donning of chicken feather headdresses,” he wrote.

Sunday’s game is the Chiefs’ American Indian Heritage Month celebration, a Chiefs spokesman said in an email on Monday. The day “will include a number of recognitions and other elements designed to honor the Native American community.”

In the letter, Wildcat wrote that Haskell will not participate in the day’s celebrations. When asked if Haskell had been asked to participate in any capacity, Wildcat said: “All I will tell you is that if anyone is participating, it will not be as an official representative of Haskell.”

The Chiefs declined to comment in response to Wildcat’s open letter.

Kayla Bointy, a junior at Haskell and a member of the Kiowa and Comanche tribes, is part of the Generational Protectors, a group that consists of indigenous members of the community and students from Haskell and the University of Kansas. It was one of the voices Wildcat referred to in his letter as originally expressing concern.

But Bointy said she felt Wildcat’s statement addressed the group’s concerns, “as well as explain that we do not wish Mr. Tuckwin any disrespect.”

“We just wanted to address the issue,” she said, noting the issue is misrepresentation and cultural appropriation. “We didn’t want it to look like Haskell is endorsing the Chiefs fan behavior.”

Bointy said that while the Chiefs organization’s American Indian Heritage Month celebration is likely well meaning, it “doesn’t do away with the disrespect the fans bring.”

Wildcat said he spent a lot of time writing the letter, so as not to conflate Haskell’s pride in Tuckwin with its displeasure of the football organization’s name.

“I just thought, ‘Well, it’s important to clear the air,'” Wildcat said. “I took a lot of time really crafting that and making sure it was very explicit, what I was saying, because I didn’t want to take anything away from Jerry and I didn’t want those things to get mixed up.”

“I don’t think there’s anyone more deserving of the Lamar Hunt recognition than Jerry Tuckwin.”

“I am receiving this award for the work, the mentoring, and the ‘big brothering’, I fostered during my 31 years at Haskell,” Tuckwin wrote in an email. “I love Haskell; it has provided me, my family and thousands of others a wonderful and rewarding life.”

A more in-depth feature on Tuckwin and his accomplishments will be published later this week in the Journal-World.