Holiday travelers should expect crowded roadways; Thanksgiving likely to have rain or snow 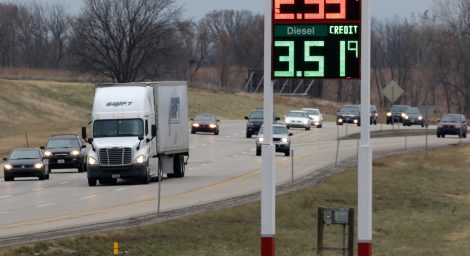 Motorists drive west, on the Interstate 70 portion of the Kansas Turnpike, past a rest area near Linwood, Kan., Wednesday, Nov. 26, 2014. (AP Photo/Orlin Wagner)

With an expected increase in travel and a threat of snow on Thanksgiving day, travelers need to pack a little patience when they head out for the holiday, according to Shawn Steward, public affairs manager with Kansas AAA.

“Our projections show this will be the second-highest Thanksgiving travel volume since AAA began tracking in 2000,” Steward said, speaking by phone with the Journal-World. It’s expected there will be a 2.7% increase in travelers over last year, around the region. Nationally, it’s expected 2.9% more people will be traveling compared to last year.

The weather could be a big factor, according to the National Weather Service.

“The biggest threat is snow in the forecast on Thursday,” said Matt Flanagan, a meteorologist with the weather service in Topeka. “We know there will be some kind of precipitation, but what type is still being considered. The forecast is still coming together.”

This week 4.5 million travelers around a seven-state region including Kansas are expected to take trips of 50 miles or more away from home, said Steward.

Gasoline prices might be playing a part in the increased travel. In Kansas, prices are currently the 11th cheapest in the nation. Monday the average price for gas in the state was $2.32 vs. $2.59 nationally. The lower prices give people a little more money to spend on travel, Steward said.

Those traveling should expect Wednesday afternoon to be the worst travel period, especially during rush hour, Steward said.

Temperatures are expected to steadily grow colder, with a slight chance of snow Wednesday night. The current forecast calls for a 60% chance of precipitation on Thursday. Depending on the temperature, it might come in the form of rain rather than snow, Flanagan said. A slight chance of rain or snow will remain through the weekend.

With extra vehicles on the road this holiday season, Steward said drivers needed to keep their hands on the wheel. Hand cellphones over to other passengers in the vehicle. Plus, with the potential for wintry weather, travelers should have an emergency car kit with warm clothes, a flashlight and tools in case of a breakdown.