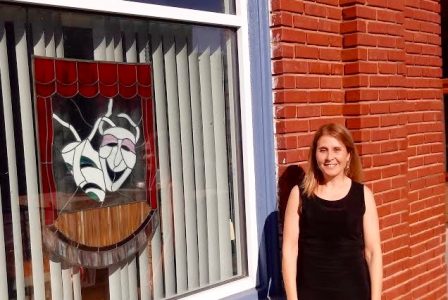 Jeannette Blackmar is now transitioning from her job as executive director of the Baldwin City Chamber of Commerce to a position as the first executive director of the Lumberyard Arts Center. She will her Lumberyard duties full time next month after the Chamber board names her successor. She is pictured Friday, Nov. 15, 2019 outside the arts center.

Jeannette Blackmar is returning to her old office home at the Lumberyard Arts Center in a new capacity.

Blackmar, who has served as Baldwin City Chamber of Commerce director for the past four years, is leaving that position to become executive director of the Lumberyard Arts Center. Blackmar and the Chamber were housed in the Lumberyard before moving two years ago to a separate office across the street at 720 High St.

Blackmar is transitioning to her new position this month, working limited hours at the Lumberyard while continuing with her duties at the Chamber while its board looks to fill that position.

Blackmar said she is proud of what the Chamber accomplished in the past four years, and that the decision to leave for the Lumberyard job was a difficult one. Among the Chamber’s activities and accomplishments of the past four years were the doubling of membership, joining with city staff to hold breakfast discussions focused on community issues, partnering with the Baldwin City school district on such things as career fairs, internships and apprenticeships and working with the Douglas County Foundation and Leadership Douglas County to provide leadership skill-building opportunities in Baldwin City.

“Fundamentally, the greatest highlights of my time at the Chamber were the relationships built with our business community and partnerships created with businesses, local government and nonprofits that connected people to resources, provided opportunities and venues for empowerment and filled gaps in our community,” she said.

Blackmar has an undergraduate degree in anthropology. She earned a master’s degree and completed doctoral course work in public administration at the University of Kansas. When she came to the Chamber, Blackmar said she was a believer in the ability of nonprofits to make positive changes in communities. She said she is now bringing that view to the Lumberyard.

“When the position at the Lumberyard Arts Center opened, I felt it was an opportunity to connect and focus my passion for the arts and community development,” she said. “Prior to the Chamber position, I gained 20 years of nonprofit management experience working in arts and cultural organizations, including museums and a performing arts center.”

Blackmar’s duties will encompass all Lumberyard activities, such as scheduling classes, organizing events and shows, recruiting volunteers and renting the Lumberyard as an event venue. Her core charge from the board is to continue and enhance the Lumberyard’s mission of being the home in the community of the visual and performing arts.

With that goal in mind, Blackmar is not leaving her economic development hat behind at the Chamber. She believes the arts can drive employment, revitalization, engagement and entrepreneurship. She said the Lumberyard is positioned to take a bigger role in arts-focused downtown redevelopment because of the city’s decision to redevelop the Lotatorium adjacent to the arts center from a vacant lot to a park that includes a performing stage.

The new park will provide even greater opportunities once the Lumberyard completes phase II of its renovation of adding an indoor theater in the now-empty back half of its historic building, she said. Phase II is currently unfunded and unscheduled, however.

“The vision is to create a culture of creativity, innovation and entrepreneurialism in the heart of downtown Baldwin City for citizens of all ages,” she said.