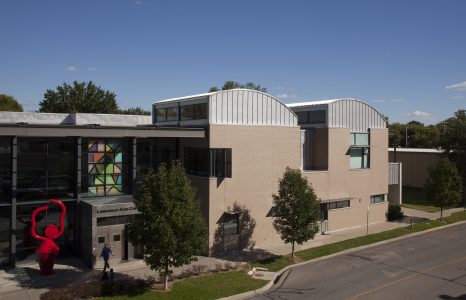 A local theater production is looking to be a beacon of hope for those affected by suicide-related grief.

The Lawrence Arts Center on Saturday will host Life Restoration Ministries’ “Hope Remains Even in the … Shadows.”

Written and directed by Rita Rials, the production delivers its message through dramatic vignettes, music, prayer and narrative, according to a news release from Life Restoration Ministries. Rials wrote the play about three years ago, said Nicole Rials, Rita’s sister. A conversation that the playwright had several years ago with her sister inspired the play.

“I had a strong desire to specifically address the grief of suicide loss survivors,” Rita said. “I want to validate their feelings and struggles and to let them know there is always hope and the opportunity to live with joy and peace again.”

Nicole founded the nonprofit ministries in 2007, and Rita has written and produced several plays at the Lawrence Arts Center. The sisters said the community needed to hear the message of “Hope Remains.”

“Theater is a way to reach people, and as a Christian playwright I want to share the message of hope with everyone regardless of their faith,” Rita said.

Consisting solely of volunteers, the production team has rehearsed since late September. Nicole, a vocalist in the play, is also a licensed social worker.

“We have an amazing cast that includes a law enforcement officer, two local pastors, members of the Douglas County Chaplain Corps, an educator in the school district and others,” Nicole said.

Sgt. Alex Kliem of the Douglas County Sheriff’s Office said the play affected him both professionally and personally. Kliem will play the role of a law enforcement officer who helps deliver the news of a suicide.

“Having responded to calls of this nature, and knowing someone who has committed suicide, I see this play as a way to let the audience know that no matter what your station is in life, or your profession, everyone is affected,” Kliem said. “They will be surprised how many people have been affected by suicide and that there is no need to hide those feelings. It’s OK to be human.”

When she heard about the production, single mom and vocalist Linette Williams said she had to take part.

“Working with this organization in the past has caused me to have a soft spot in my heart to help serve the community, whether it be through a performance or to help spread the word of Christ through song or dance,” Williams said.

Lawrence Heights Christian Church Pastor Steve Koberlein plays the emergency response chaplain who provides help to those suffering in the wake of a suicide. Koberlein said the recent increase in suicide rates had affected the community either directly or indirectly.

“Not only does it address the heartache and pain experienced after a suicide, it also points people to the hope and healing that can be found in an authentic way,” Koberlein said. “As people relate to this story, I pray they find healing, restoration and true peace.”

After the production, the cast will have a discussion with the audience, Nicole said.

Tickets for the 7 p.m. show on Saturday at the Arts Center, 940 New Hampshire St., are $20 and are available on the Arts Center’s website, lawrenceartscenter.org. All proceeds from the production will go toward future productions and outreach programs through Life Restoration Ministries.