‘Direct, quite simple and singable’: Local composer shares tips for writing a hymn 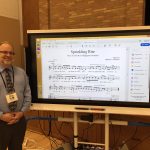 Brian J. Nelson stands by a screen image of music he wrote, during a presentation to a class at St. John Catholic Church, 1208 Kentucky St., on Friday, May 17, 2019. Nelson will have a concert of his works at 7 p.m. Thursday, at the St. Lawrence Catholic Campus Center, 1631 Crescent Rd.

Music flows through Brian J. Nelson’s daily life; it’s on his mind all the time.

“If I’m actively working on a piece it’s always there, and I’m running through the solutions,” said Nelson, the director of sacred liturgy and music at St. Lawrence Catholic Campus Center.

Nelson, was on a mission Friday morning talking to music students at St. John Catholic School explaining to them what a composer does and talking about the upcoming concert of his work “Ballade” at 7 p.m. Thursday at the St. Lawrence Catholic Center, 1631 Crescent Road.

Nelson admits a composer might seem mysterious to many people. He has been intrigued with creating music since he began writing arrangements to Christmas carols when he was 12.

No one heard those early compositions but his family. But, ever since, writing music has been a way to express his inner self.

He is now the creator of numerous musical compositions including five published hymns, three which will be performed at the concert Thursday night.

For those thinking about writing a hymn, or a song of praise, Nelson has three tips.

“They need to be quite direct, quite simple and singable,” he said, during an interview with the Journal-World.

When Nelson was growing up, his father was a pastor in several Christian churches and his home was filled with music. He began playing the tuba in fifth grade and credits that instrument with teaching him to hear music.

By the time he was in college he was majoring in music composition, and he received his master’s in composition from the University of Wisconsin.

At the same time, he was on a spiritual journey and converted to Catholicism. He spent four years at St. Benedict’s Abbey in Atchison, then made the decision not to pursue vows to become a monk.

However, while at the monastery, he found that his musical composition improved as he explored sacred music. It was also there that he learned to chant.

“I see it was God’s providence preparing me for the work I do now,” Nelson said. “It taught me how to write music very convincingly.”

Once he left the abbey, he came to the University of Kansas, where he earned his doctorate in music composition. For the past eight years, he has been the musical director at the St. Lawrence center. 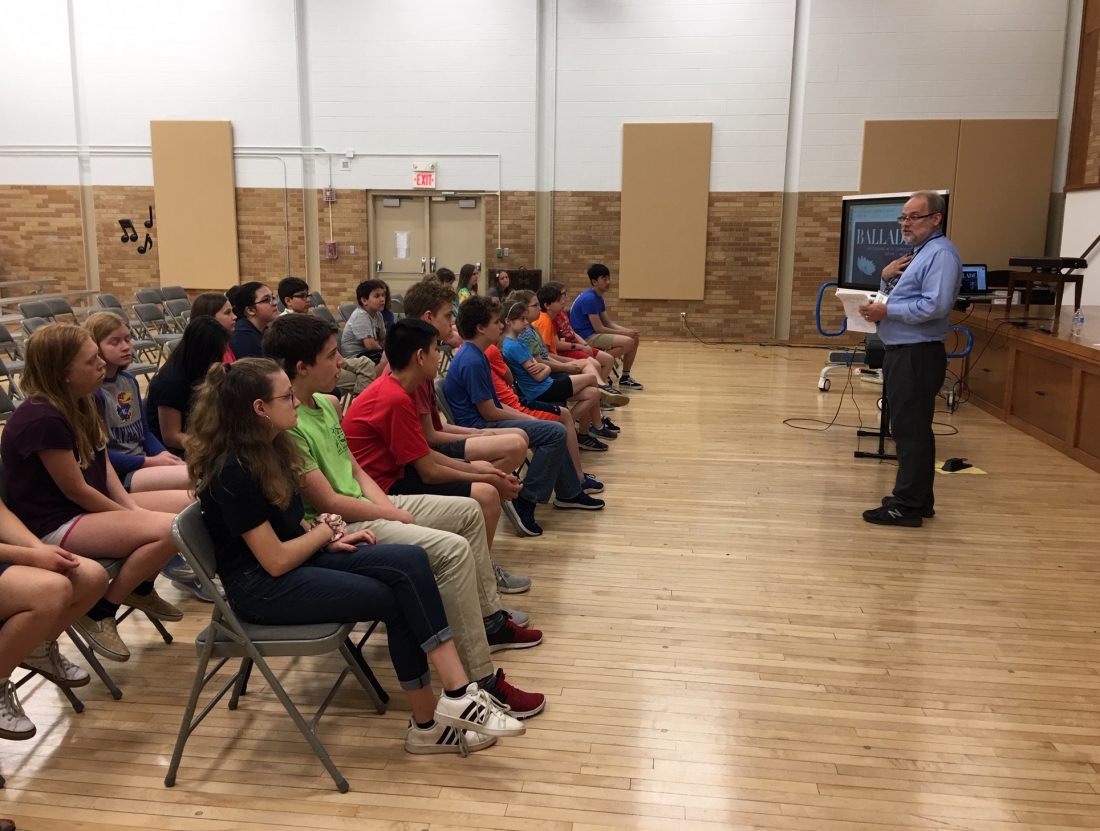 Chelsea Solomon, the music teacher at St. John Catholic School, said she invited Nelson to speak to her students because of his work.

“I want them to see what a real-life music composer does and how they get published,” Solomon said.

Although they’ve heard of Mozart and Beethoven, Nelson said, they seem less aware that there are living composers.

“A composer is a musician who plays and loves music,” Nelson said to the students. “You have to have this desire to create and write music that didn’t exist.”

As he talked to the students he hoped to inspire them to attend his concert, which will include ensembles and the St. Lawrence Choir performing an array of Nelson’s music from solo vocal to chamber music to sacred choral works.

However, he had an even more important motive for talking to the students.

“I feel I have a mission to help people understand what music means and how it communicates and why it matters,” he said.

Nelson’s objective is to help people understand why it matters in our life.

“It’s a very powerful form of communication that bypasses our rational process,” Nelson said. “It goes straight to the heart.”