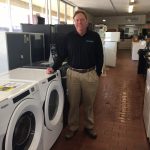 Andy Vigna, owner of Stoneback Appliance, stands next to washing machines on Monday, May 13, 2019, in his store at 925 Iowa St. Vigna said he's felt the effects of the American trade war with China, despite his Whirlpool products being mostly American-made.

James Dunn was shopping for a new stove Monday morning at Lawrence’s Stoneback Appliance, hoping to buy something just in case prices went up.

“The thought crossed my mind, ‘I should get an appliance fast,'” said Dunn, a Lawrence resident. “I thought of the tariffs and I thought I better come right away.”

With the Trump administration more than doubling tariffs on billions of dollars of Chinese imports, consumers will see the rise in many products, according to the Associated Press. In retaliation, China announced Monday it would raise tariffs on $60 billion in U.S. goods.

U.S. import taxes on $200 billion of Chinese goods jumped to 25% on Friday, from 10%, as President Donald Trump followed through on his threat to hike duties after he accused Chinese negotiators of backtracking on previous concessions they had made in ongoing trade talks, the Associated Press has reported.

Although 80-90% of Whirlpool products are made in the U.S., some of the components for a front-loading washer, such as the computerized panel and electrical harness, are built in China.

“Tariffs are causing the manufacturer to pay more for their foreign-built components,” Andy Vigna, owner of Stoneback Appliance, said. “The manufacturer isn’t going to eat the cost. They pass it on to the dealers and the consumers.”

But it’s not just washing machines. The cost of appliances in general has risen over the last year. Everything costs more, Vigna said.

He estimated that the cost of a washing machine has increased by 10% in the past year. Although he cautioned that it may not completely be due to tariffs, he says that’s his theory.

“They still have to pay for that control panel and pay a higher price to get to the U.S.,” Vigna said.

Despite the increase, Vigna said it hadn’t affected business. Sales have been brisk, and he and his nine employees stay busy with repairs and the delivery and installation of the products they sell.

A spokesperson with the Newport News, Va., national office for Factory Direct Appliance, which has a store at 2108 W. 27th St., told the Journal-World via email that the company had not seen a change in appliance sales due to recent tariffs. Like Stoneback Appliance, the majority of appliance vendors they sell are manufactured in the U.S.

“The cost of raw materials and parts have increased due to tariffs. As a result, appliance manufacturers have incurred increased costs and raised their manufacturer retail suggested price,” according to the email.

Calls and emails to Aaron’s and Home Depot were not returned Monday.