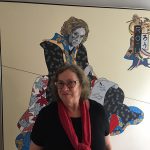 Denise Low stands in front of a portrait of herself in her Lawerence home on May 1, 2019. The painting was done by Roger Shimomura, artist and a retired professor at the University of Kansas in 1991.

Kansas poet Denise Low will be pulling up stakes and heading west this summer.

In preparation for a move to California, she has been decluttering her life. It helped that the Kenneth Spencer Research Library at the University of Kansas accepted 20 boxes of her papers, manuscripts, letters and journals.

Low, who turns 70 on May 9, has more than 20 published books of poetry, personal essays and scholarship. She spent 27 years as a professor at Haskell Indian Nations University and founded its creative writing program before retiring in 2010.

From 2007 to 2009, she was appointed the second poet laureate of Kansas. Former Gov. Kathleen Sebelius started the program in 2004. Jonathan Holden was the first poet laureate, and Huascar Medina was recently named to the position for 2019 through 2020.

That was a hectic time in Low’s life, as the position is much more than an honorary title.

“Kansas makes their poets work for their supper,” Low said, laughing softly during an interview in her home near the KU campus. “To the stars through difficulty, nothing is given.”

Along with continuing her duties at Haskell, there were speaking engagements across the state, plus every Kansas poet laureate is expected to have a project. Low’s was highlighting 25 Kansas poets in a book she edited called “To The Stars: Kansas Poets of the Ad Astra Poetry Project.”

Before leaving the state, Low will host a poetry reading and small display of her materials from 5 to 7 p.m. May 9 at the Spencer Research Library, 1450 Polar Lane. Those attending must RSVP at 785-864-9817.

“She’s really the dean of Kansas poets — rooted in and dedicated to the state, a scholar of its literary history, supportive of its emerging writers, a champion of diverse voices,” said Eric McHenry, the state’s poet laureate from 2015 to 2017 and associate professor of English at Washburn University.

Part of a writing tradition

Low was raised in Emporia and entered KU in the fall of 1967. Her very first class was with Elizabeth Schultz, an English professor, who became a friend and fellow poet. Low earned bachelor’s and master’s degrees in English, married and had two sons.

Once David and Daniel were out of diapers, she returned to school, earning a Master of Fine Arts degree in creative writing from Wichita State University. She then received a doctoral degree in English at KU. Along the way, her poetry was being published in literary journals.

“The town was hopping in the 1980s,” Low said. She was able to take classes from Ed Dorn and Ken Irby, who were part of a group of progressive poets associated with the experimental Black Mountain College in North Carolina. Plus, William Burroughs, part of the Beat Generation of writers, was living in Lawrence.

“KU would let old people keep working until later than many colleges, and they negotiated for him (Burroughs) to be a visiting writer at KU,” Low said. “He had a series of presentations, and I went to all of them. He was a real disciplined guy and a very brilliant man, not Jack Kerouac wild. He was a sharp, focused person.”

She was also inspired by the work of William Stafford, a native of Hutchinson, who became a consultant in poetry to the Library of Congress.

For Low, leaving her papers at the Spencer is part of the legacy of the writing process.

“For me, leaving papers here as I am getting ready to leave the state is a way I’m acknowledging this wonderful tradition I have been a part of for decades,” she said.

At the same time, Elspeth Healey, special collections librarian, KU Libraries said they were excited to have the materials.

“They not only document the poetic communities here in Lawrence and around the state but also Denise’s larger national role as a poet and publisher,” Healey said.

Low hopes the collection reflects a woman writer of mixed heritage at a time when women didn’t have as many opportunities as men.

“That’s critical there were not that many women writers,” said Low, who also became an editor and publisher.

Low is not bitter — it’s just the way it was.

“I hope this collection, through this traditional time, helps people understand some of the real struggles and suffering and triumphs which are part of the gender equity story,” Low said.

For Caryn Mirriam-Goldberg, who followed Low as poet laureate in 2009, the women could have been rivals, but instead became fast friends.

“We instantly liked each other’s writing and liked each other, and over the years, we’ve worked so closely on our own and each other’s poetry together that now I can hear Denise’s sound advice and clear vision guiding me as I write and revise my poems,” Mirriam-Goldberg said.

“She has worked to lift me up as well as hundreds of other writers, giving her advice, helping us arrange readings or find publication in a journal or with a press, and generally supporting the growth and strength of the Kansas area writing community,” Mirriam-Goldberg said.

Low promised herself that before she got too elderly, she would clean out the house where she had lived for decades and move into the next phase of her life.

The move to California with her husband Tom Weso, also a writer, will bring them closer to their family, including her son who has a winery north of San Francisco. Although she may be decluttering, she doesn’t plan on downsizing or slowing down. She will continue writing and working on projects.

While the time spent as poet laureate was exciting, Low said it wasn’t the highlight of her career.

“The highlight of my career is today,” she said. “I’m such a better writer, I have more confidence and I understand what I am doing better.”

As she continues to create, she will be adding more to the collection at the Spencer.

“Reading Denise’s poetry, I’ve always admired her precision, her ear and her subversive sense of humor. As I’ve had the pleasure of becoming her friend, I’ve found those same qualities in her conversation: She’s eloquent, insightful, attentive and funny as hell,” McHenry said.

“Kansas is going to miss her,” McHenry said.