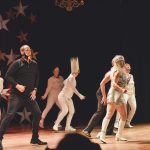 For those who enjoy singing along to the car radio, it might be time to kick it up a notch and go public for a good cause.

Organizers of Lawrence Mic Drop 2019 are looking for 10 to 12 contestants to perform on the stage of Liberty Hall during the June 22 fundraiser for The Willow Domestic Violence Center.

This will be the third year for the fundraiser. Last year’s event raised more than $30,000 for The Willow, which serves survivors of domestic violence and human trafficking in Douglas, Franklin and Jefferson counties, according to Will Averill, director of communications for Willow.

To enter, each act must raise $1,000 to donate to The Willow. An act can be an individual or a group lip-syncing a favorite song. They will get three minutes to perform on stage. The winner will take home $3,000. The “People’s Choice” winner takes home a basket of gifts from local businesses.

Averill was still pinning down judges but said they would be local celebrities.

The deadline for signing up is April 15. To apply to compete or for more information about the event go to www.lawrencemicdrop.org. Those too shy to perform can sponsor a four-top table for $200. Admission tickets are $35 per person.

“People really go all out,” Averill said. “It’s high production, and it comes from the heart. You have to be willing to put yourself out there.”

The acts have ranged from hip hop to slow ballad, he said. While people can pick their style of performance, they should keep in mind that The Willow is an organization that works with people in crisis, Averill said.

“What I like is that it’s a great evening out,” Averill said.