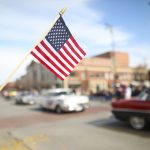 In this file photo from Nov. 11, 2018, an observer waves a flag as a line of classic cars carrying veterans proceeds along Massachusetts Street during the Lawrence Veterans Day Parade.

The Veterans of Foreign Wars post in Lawrence wants to pay tribute to Douglas County’s present and former service members.

Alford-Clarke Post 852 is asking area veterans to send in photos of themselves to be included in its new project, “Douglas County Portraits of Honor.” The pictorial book will be a fundraiser for the post, according to a news release from the organization.

“We can bring that history and that sense of service right into someone’s house,” Vern Russell, project chairman with the Lawrence VFW, said in the release. “It can sit right there on the coffee table or your bookshelf ready to be experienced and remembered.”

All veterans who live or have lived in Douglas County can be included in the book, and there is no charge to submit a photo, according to the release.

The VFW asks veterans or family members to email a scanned photo to lawrencevfw@gmail.com by June 30. VFW staff can also scan and return photos for those who stop by the post, 1801 Massachusetts St., during regular hours. According to its Facebook page, the post is open from 4 p.m. to 8 p.m. Monday through Thursday, 4 p.m. to 10 p.m. Friday, 11 a.m. to 8 p.m. Saturday, and 10 a.m. to 4 p.m. Sunday.