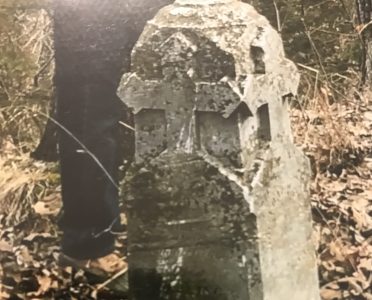 Employees of the city of Lecompton and Lecompton Township will join in an effort Wednesday, July 24, 2019, to relocate to a community cemetery the rediscovered headstone of a resident of the town who was killed during William Quantrill’s raid on Lawrence. The tombstone, and one of a student at the long-closed Lane University in Lecompton, were lost when a rock company quarried the site of a pioneer cemetery during World War II.

A Lecompton community effort set for Wednesday will attempt to preserve a piece of Douglas County history long thought to be lost.

Paul Bahnmaier, president of the Lecompton Historical Society, said employees of the city of Lecompton and Lecompton Township will team up Wednesday to relocate two tombstones rediscovered on private property east of the town to Maple Grove Cemetery in Lecompton.

One of the tombstones is an O’Neil family marker that includes the name of James O’Neil, who was killed with Lecompton-area brothers Frederick and William Klaus when William Quantrill raided Lawrence on the morning of Aug. 21, 1863, Bahnmaier said. The three Lecompton-area residents were part of a crew working on a new Lawrence bridge over the Kansas River, he said. It’s unknown if they commuted from Lecompton the day of the raid, camped out near their worksite or had lodging in Lawrence, he said. Whatever the case, they were among the more than 150 men and boys Quantrill’s raiders killed that morning.

“They weren’t singled out for any reason,” Bahnmaier said. “They were just men in Lawrence during the raid.”

The Klaus brothers were buried in a family cemetery near Lecompton, Bahnmaier said. O’Neil was laid to rest in Bald Eagle Cemetery, a pioneer cemetery east of Lecompton on a bluff overlooking the Kansas River, he said.

The cemetery disappeared when a rock company bought it and surrounding acreage in 1942 and started quarrying the property, Bahnmaier said.

“The rock company moved the tombstones to the side and bulldozed everything into the Kansas River,” he said.

All the cemetery’s headstones were thought lost until several years ago when a Lecompton youngster, Robert Parker, walking the old quarry property discovered in a brush pile the O’Neil family grave marker and one for a student of Lecompton’s long-gone Lane University who drowned in the Kansas River in 1877, Bahnmaier said. When told of the discovery, the owners of the property, Chad and Amy Gustin, notified the Lecompton Historical Society.

It took some time to plan the effort to retrieve and relocate the marble O’Neil family stone and the other smaller gravestone from their current site several hundred feet from the nearest road, Bahnmaier said. Employees with the city of Lecompton and Lecompton Township had to wait until conditions were right to gain access to the stones, he said.

“For one thing, they had to wait until it was dry enough,” he said. “You really have to see the site to appreciate what an arduous undertaking this is going to be.”

Employees from the city and township will start their effort to relocate the stones at 9 a.m. Wednesday, Bahnmaier said. The effort involves only the two headstones. The bodies buried in the Bald Eagle Cemetery disappeared when the property was quarried and may have been bulldozed into the Kansas River in 1942, he said.