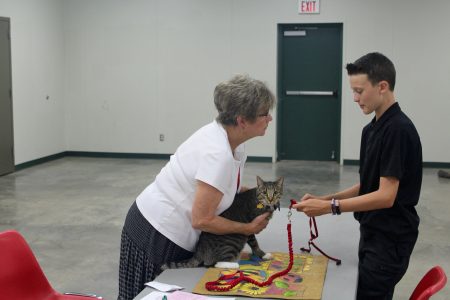 Judge Sue Schmidt handles Opie the domestic shorthair cat as she quizzes Blake Wohler on his knowledge of cats on Saturday, July 20, 2019, at the Douglas County 4-H cat show.

Blake Wohler wasn’t upset when his cat Opie, whom he was showing in this year’s Douglas County 4-H cat show, noticed another competitor opening some cat food and jumped off the judging table.

Cats being cats, the rules for acceptable pet behavior are more relaxed than in the dog show. So Blake, 13, calmly retrieved the domestic shorthair cat and returned to the table, where judge Sue Schmidt asked him how he groomed Opie for the show and quizzed him on his general knowledge of cats.

“She asked me what a cat’s whiskers are for, what they use the back legs for and other things,” Blake said.

Although the 2019 Douglas County Fair hasn’t officially started yet, a few of its contests, like Saturday’s cat show, are already going on. The fair officially kicks off Monday, July 29.

Margaret Kalb, Douglas County Fair Board extension agent, said more than 30 county 4-H participants entered this year’s cat show, and another 20 signed up for the Saturday morning hand animal pet show, which included such animals as hamsters, ferrets and rabbits. In addition, Kalb said there were about 20 entries for Saturday afternoon’s dog show.

In total, participation in the pet shows has roughly doubled since last year’s fair, Kalb said. She attributed the increase to Douglas County Fair Board member Becky Bentley, who attended meetings of all of the county’s 4-H clubs to encourage people to sign up.

Blake had been preparing Opie for the show for quite a while. He said he combed the cat out daily for the past few weeks, took him to the vet to update his shots and trimmed his claws.

“I even brushed his teeth,” he said.

Showing in both the cat and dog shows Saturday was 9-year-old Piper Flory, of the Palmyra 4-H Club. Later on in the fair, she also plans to show a pig she raised.

“Piper’s all about the fair,” Kalb said. “She knows everything about pigs.”

Piper said she’s been looking forward to the fair for months and enjoyed working with her pets to get ready for Saturday’s events.

“I just love dogs and cats,” she said. “I like working with animals.”

Kalb said certain animal shows, such as the meat goat and poultry shows, are growing in popularity at the fair. The meat goat show allows 4-H participants to enter animals in livestock shows without expending the money or time cattle require, she said. Meanwhile, she said, poultry opens up animal projects to 4-H club members who live in Lawrence and Baldwin City, which now allow residents to raise poultry on their properties.

In contrast, Kalb said, dairy cow show numbers are way down. She expects that event will disappear from the county fair in the near future as the number of dairy farms continues to decline.

Saturday’s pet show entries were the first of 3,400 projects that 4-H’ers will exhibit at this year’s fair, said Kaitlyn Peine, Douglas County Extension’s 4-H youth development agent. For some, she said, the projects are early steps in mastering skills they will use the rest of their life.

“My mother enrolled me in 4-H public speaking my first year in 4-H,” she said. “I didn’t know at that time I would be making public presentations nearly every day in my job. It really prepared me to be comfortable speaking in front of people.”