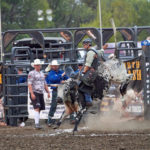 The 2019 Douglas County Fair will arrive in two weeks, and this time, the fair’s staple events like the demolition derby and the tractor pulls will be joined by a new attraction: a beer garden.

Although a few events are scheduled for this week, the annual fair officially begins Monday, July 29, and continues through Saturday, Aug. 3, at the Douglas County Fairgrounds, 2120 Harper St.

Douglas County Fair board member Becky Bentley said the fair’s biggest attractions should be the the popular demolition derby on Aug. 2 and the Bull Bash rodeo event on Aug. 3. The derby, a longtime fair favorite, and the Bull Bash, introduced at last year’s fair, proved to be a popular combination last year at the 1,935-seat Outdoor Arena, she said.

“All the seats were filled for the demolition derby,” she said. “Douglas County loves the derby. The Bull Bash wasn’t sold out, but ticket sales far exceeded other Saturday evening events we offered in the past.”

The presence of three riders from the Professional Bull Riders organization should make this year’s Bull Bash more competitive than last year’s, she said.

One thing that’s new to the fair this year is a beer garden. Although the Douglas County Commission allowed the fair board to add that feature last year, it fell through when the board couldn’t find a vendor in time. No such problem happened this year, Bentley said, and beer will be sold in a fenced area near the fairgrounds stage on Wednesday, Thursday, Friday and Saturday evenings of fair week. In addition, beer will be sold in the Outdoor Arena during the demolition derby and the Bull Bash.

“People will be able to buy beer and drink it in their seats, because the arena is already a restricted area,” Bentley said.

Although the two big Outdoor Arena events and the carnival attractions will require tickets, all the other activities at the fair are free, said Margaret Kalb, Douglas County fair board extension agent. That includes the hot-rod garden tractor pull on July 31 and the antique tractor pull on Aug. 1.

Also free is the live music on the fairgrounds stage, including a performance from country artist Walker Montgomery from 9 p.m. to midnight Aug. 3. Bentley said the fair board was thrilled to be able to book Montgomery to close out the fair.

“He’s the son of country music star John Michael Montgomery,” she said. “Anyone who listens to country music knows who his father is.”

Kalb also encouraged Lawrence and Douglas County residents to take time to see the livestock shows and the crafts, arts, horticulture and science projects that will fill the fairgrounds’ exhibition spaces. Those shows are the heart and soul of the fair for the hundreds of 4-H participants who will be exhibiting, said Kaitlyn Peine, Douglas County Extension’s 4-H youth development agent.

“4-H’ers have really been working hard the last two months to complete their projects for the fair,” she said. “We really encourage everyone to get out and see the quality of work they have put into their projects.”

A complete schedule of fair events can be found online at dgcountyfair.com.