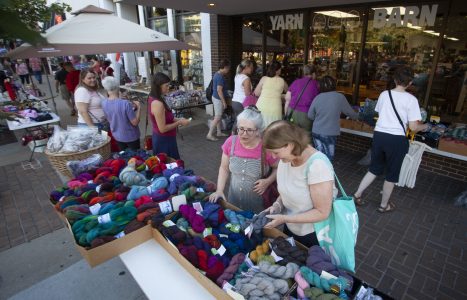 When Veronica Decker arrived on Massachusetts Street at 5:30 a.m. Thursday, a line of shoppers had already formed at Urban Outfitters.

By 8:30 a.m. she had taken a load of purchases to her car and was back on the street looking for more bargains at the 60th Annual Downtown Lawrence Sidewalk Sale. Decker was happy with her discoveries, including a $50 pair of shoes for $5. But Decker, a Lawrence school teacher, said coming downtown for the sale was also about bumping into friends and former students and stopping to talk.

A gentle breeze on the scorching 100-degree day pleased Madeleine Stegman, a shop assistant at Third Planet, 846 Massachusetts St. She was under an awning outside the shop helping customers with an array of items from sunglasses to lava lamps.

Sitting on a stool outside Earthbound Trading Co., 916 Massachusetts St., Max Fowler, a sales assistant, said the shop had opened at 6 a.m. and by 8 a.m. had sold $700 in merchandise.

By Thursday afternoon, the outside racks at Urban Outfitters, 1013 Massachusetts St., were being moved back indoors. Andrew Chavez, a sales assistant, said it had been like a tornado of clothing as people took in the sale first thing in the morning.

“This place is on everyone’s hit list,” Chavez said. “It’s typically one of the biggest sale days of the year for the store.”

Because the store’s prices tend to run on the steep side, he said it was a good opportunity to get sales on end-of-summer clothing.

Despite the heat index rising to 114 degrees by 3 p.m., Sally Zogry, executive director of Downtown Lawrence Inc., said the sale had a lot of “good energy” and had “a good steady crowd.” She estimated that about 10,000 people had come out for the sale, with a new wave of shoppers hitting Mass. Street after the workday had ended at 5 p.m.

She particularly noted a great response to the raffle for a diamond necklace donated by Kizer Cummings Jewelers, 833 Massachusetts St. The raffle was a special event to mark the 60th anniversary of the sidewalk sale. The winner will be notified on Monday, she said. 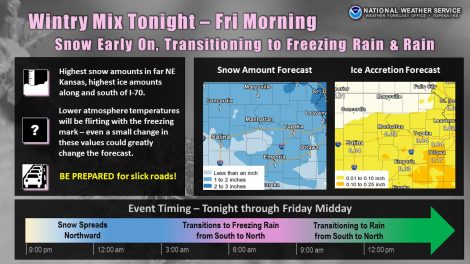