Gov. Kelly to visit Eudora on Tuesday for ceremonial signing of library bill 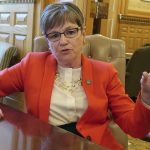 Gov. Laura Kelly, pictured in this AP file photo from June 13, 2019, will visit the Eudora Public Library on Tuesday, July 16, 2019 for a ceremonial signing of legislation that allows the creation of a Eudora Community Library District.

Gov. Laura Kelly will make a visit to Eudora for an event that was postponed because of the May 27 tornado.

The governor will make an 11:30 a.m. Tuesday visit to the Eudora Public Library, 14 E. Ninth St., for a ceremonial signing of legislation that is important to the library’s future. The legislation authorizes the Eudora City Commission and Eudora Township Board of Trustees to pass a joint resolution creating the Eudora Community Library District.

The legislation that Sen. Tom Holland, D-Baldwin City, introduced in the 2019 legislative session as Senate Bill 59 gives the library board the authority to annually raise property tax revenue with a levy of up to 5 mills to fund the library’s operations. The legislation also authorizes the library board to ask city of Eudora and Eudora Township voters to approve property tax assessments for capital improvements. Kelly was to sign the bill May 30 in Eudora, but the event was called off after the May 27 tornado.

The Eudora Public Library currently has a capital campaign underway to help raise money to build a new 10,000- to 12,000-square-foot library across Ninth Street from the 2,500-square-foot building that has been the library’s home the past four decades.

Carol Wohlford, director of the library, told the Journal-World in May that the campaign had raised $400,000, and the goal was to raise at least $100,000 more before asking voters to approved a bond issue for the new building.