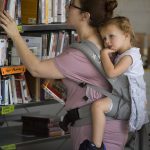 Sarah Johnson sifts through the shelves of books while carrying her daughter Megan on her back during the 2017 Friends of the Lawrence Public Library Summer Book Sale. This year's summer sale will be 10 a.m. to 6 p.m. Friday and Saturday and noon to 4 p.m. Sunday at the library, 707 Vermont St.

Shoppers can browse a selection of tens of thousands of books, CDs and DVDs this weekend at the Friends of the Lawrence Public Library’s Summer Book Sale.

“We estimate over 64,000 books are on our shelves inside,” said Angela Hyde, program coordinator for the Friends group. “We don’t even try to estimate the rolling shelves and the back stock.”

The Friends group’s fundraisers support library collections, programs, and services, according to the group’s website.

The sale runs from 10 a.m. to 6 p.m. Friday and Saturday and from noon to 4 p.m. Sunday on the west side of the Lawrence Public Library, 707 Vermont St.

A University of Kansas alumnus who’s played with the likes of Jimi Hendrix, Joe Cocker and Crosby, Stills & Nash will return to Lawrence this weekend for a charity concert.

Keyboardist Mike Finnigan will be playing Saturday night at Abe & Jake’s Landing, 8 E. Sixth St. The concert is a fundraiser for Community Village Lawrence, an organization which provides transportation and other services to help aging residents remain in their homes.

Now 74, Finnigan first came to town in 1963 to attend KU on a basketball scholarship. His fraternity brother John LaRocca, who now serves on the board of Community Village Lawrence, remembers Finnigan playing the baby grand piano in the Phi Kappa Psi house at breakfast every morning.

LaRocca said the 6’5″ Finnigan was a tremendous basketball player and an equally talented musician. Ultimately, Finnigan ended up pursuing music as a career. He left KU to play with a band called The Serfs. Over the next several decades, he built a musical career touring and recording with an array of artists, including Jimi Hendrix, The Manhattan Transfer, Buddy Guy, John Hiatt, Taj Mahal, Joe Cocker and Crosby Stills & Nash.

Accompanying Finnigan will be guitarist Bill Lynch. He lived in Lawrence from 1969 to 1985, and the two have played together over the years.

General admission tickets are $38 and can be purchased at the door.

Meet critters in the mud at Baker Wetlands

Kids can spend some time with critters who live in the mud during this month’s Nature Tots program at the Baker Wetlands Discovery Center.

At the free event, kids under age 5 can see live salamanders and learn about earthworms and other mud-loving wildlife, said Morgan Glade, the center’s education and outreach specialist. The Baker Wetlands website advises attendees to wear clothes they’re not afraid to get dirty.