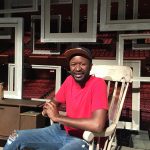 Paris Crayton III sits on the set of his new play, "Chasing Gods," which opens Friday, July 12, 2019, at Crafton-Preyer Theatre in Murphy Hall on the University of Kansas campus.

Theatergoers attending the premiere of “Chasing Gods” will have an unusually up-close experience; they’ll be seated on the stage.

“It’s an intimate viewing experience,” said Paris Crayton III, the creator of the production, which opens Friday in Murphy Hall on the University of Kansas campus.

Crayton, currently of Brooklyn, N.Y., has been at KU for the past month working with Markus Potter, co-artistic director of the Kansas Repertory Theatre. The play is being produced in partnership with NewYorkRep, where Potter serves as producing artistic director.

“We learned about Paris’ play about half a year ago and did a table reading for the NewYorkRep,” Potter said. “Then we committed to option the play for the fall of 2020 season.”

This is the first time the play has been staged and the first time NewYorkRep has worked with Kansas Repertory Theatre, Potter said. According to its website, NewYorkRep produces new plays and musicals that inspire and compel social change by telling stories that expose the travesty and beauty of our humanity.

“Lawrence is the first to experience this,” Crayton said, of his play, which is set in the summer of 2016 just three weeks after the Pulse nightclub shooting in Orlando, Fla. On June 12, 49 people were killed when a man opened fire with an assault-style rifle inside Pulse. For the production, the backdrop of the stage is filled with 49 empty picture frames representing those who were killed.

The play centers on a Florida family affected by the massacre. The matriarch of the family is a pastor who condemns the victims of the tragedy in the name of God and Christianity, which alienates her from her family, Crayton said. The play explores how the family struggles to co-exist with someone whose beliefs they oppose.

Crayton said that even though the play deals with a heavy subject, there is also humor.

“Life is funny,” Crayton said. “Don’t come expecting to be depressed. The play has a lot of light moments and, of course, there will be tears shed. We are experiencing this family and their day-to-day lives.”

Six characters in the play are all searching for God in their own ways.

“A lot of times we have our concept of God and if you don’t believe in God the way I believe in it, then you are wrong. And that’s what the family is dealing with, a matriarch who is saying ‘this is what I believe in my house,’ while other family members are saying they don’t believe that,” Crayton said.

The Kansas Repertory Theatre is a branch of KU’s University Theatre and the Department of Theatre and Dance. The cast of this summer’s performance includes both professional union actors from the Kansas City area as well as KU students.

“It’s exciting for the students,” Potter said. “They get to learn while working in a professional environment.”

Along with sitting on the stage, the audience will have an opportunity to offer feedback on the play. Following the performance, they will be given a list of questions — which characters did they connect with? Did they find anything confusing? How did they feel about the ending of the play?

“I want to see how the play resonated with the audience, what they liked and didn’t like,” Crayton said. He considers the play a work in progress.

“I’m going to go back and rewrite. The rewriting is never done. As a playwright, most of the process is rewriting. It’s a completely different play from when I started it,” Crayton said.

Friday night’s performance is sold out; however, tickets are available for 7:30 p.m. Saturday, 2:30 p.m. Sunday and performances on July 19-21. For more information or to order tickets, go to kutheatre.ku.edu/chasing-gods