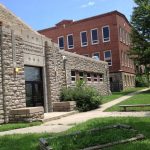 The Baldwin City Council has declined an offer from the family of the late Steve Bauer to donate the old gym on Chapel Street to the city. The offer was made as Baldwin City Mayor Casey Simoneau proposed a half-cent sales tax to renovate the building into a community center and build a larger recreation center.

Baldwin City’s mayor is restarting discussion about building a recreation center, and he wants to ask the city’s voters to authorize a sales tax to fund it.

At Tuesday’s Baldwin City Council meeting, Mayor Casey Simoneau said many residents had told him they wanted a recreation center, and that it was something the commission should have on its radar.

“I continue to hear from people, so I have to bring it up,” he said.

Simoneau is proposing to ask voters for an additional half-cent of sales tax authority, which would amount to about $230,000 of tax revenue annually. He suggested $100,000 of that could be used to create a community center at a vacant building in the 700 block of Chapel Street that was once used as a gym by the Baldwin City School District. The remaining $130,000, he said, would be used to finance construction of a larger recreation center elsewhere, which would be owned and operated by the Baldwin City Recreation Commission.

With a sales tax referendum, the recreation center issue would be in the hands of Baldwin City residents, Simoneau said. He said council members would have to act by the end of the month if they wanted the question on the 2019 general election ballot.

The council had reservations about the proposal, however. Councilman A.J. Stevens said he had doubts Baldwin City was large enough to support a recreation center, noting that residents would be required to purchase annual memberships to use the center while also paying the sales tax needed to retire construction bonds. He said the city shouldn’t make any plans for a recreation center until it’s conducted a study on whether such a project would be viable.

In addition, the use of the former gym on Chapel Street didn’t play well with some council members.

The family of the late Councilman Steve Bauer, who died in a car accident in May 2017, owns the old gym and had offered to donate it to the city. However, also at Tuesday’s meeting, the council turned down the offer. Councilman Tony Brown said it wasn’t the right time for the city to take on the expense associated with the building, while Stevens said the plans for the building’s reuse, which have not been put on paper, were too vague.

Despite their rejection of the Bauer family’s offer, council members said they were open to further discussions with the family about the building.

On Saturday, Simoneau said he would start discussions with city staff in the coming week about the proposed sales tax. Those discussions would include the possibility of a sales tax referendum before voters on the November general election ballot or scheduling a special election early in 2020, he said.

This is not the first time in recent years that Baldwin City leaders have considered a sales tax for a recreation center. In August 2016, the council approved putting a half-cent sales tax on the ballot. It rescinded that decision three months later, however, after the Baldwin City Recreation Commission told the city it wanted to use a different method to finance the project, one that would include both sales and property taxes. The recreation commission is allowed to levy property taxes with the approval of the Baldwin school board, but its request to do so was ultimately rejected.