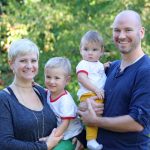 photo by: Courtesy of Ben Thomas

From left, Courtney, Indy, Ridley and Ben Thomas are pictured in a family photo in October 2018.

When he went on the the Netflix game show “Awake: The Million Dollar Game” last August, Lawrence native Ben Thomas was put in a windowless room with nothing to do but count quarters for a full 24 hours.

His mind began to wander as he became exhausted from the repetitive task of putting coins in a wheelbarrow. At one point, he even started hallucinating.

But he didn’t stop counting. And he eventually took home a jackpot of nearly $200,000.

“You get lost in your thoughts,” Thomas said of his ordeal. “At one point I started seeing different images on the quarters … I legitimately believed I saw Bob Ross and I remember how strange it was.”

Thomas, who grew up in Lawrence but now lives in Lithia Springs, Ga., with his wife, Courtney, and his sons Indy and Ridley, had to have a lot of patience to take home his $191,843 pot. The full day of coin-counting is just the start for the contestants on “Awake,” who then have to outlast their opponents at a series of tough challenges — including keeping their eyes open for extended periods of time. The winner can either take home all the money that the seven contestants counted the day before, or can gamble it for the chance to win a million dollars.

To stay motivated for the 24 hours, Thomas said he would think about his family and what he would do if he won.

Thomas, who usually wakes up at 4:30 a.m. for a 90-minute commute to Atlanta, is no stranger to sleep deprivation. When an email arrived in his inbox encouraging those with experience running on little to no sleep to audition for a new game show, he felt fit for the job.

“I was already sleep deprived,” Thomas said. “On my second kid, I was already running on little to no sleep.”

After months of auditioning, Thomas and six other contestants arrived at a seemingly deserted studio in Los Angeles to film for the show. All Thomas knew was that he would be counting quarters for a full day.

It turned out to be just as dull as advertised.

“There’s no clocks, no pens, no paper, no windows,” he said. “I had no clue how long we had been counting.”

After 24 hours, Thomas and the other contestants pushed their wheelbarrows full of quarters into the main studio in front of an energized host and audience. Having woken up at 7 a.m. the previous day, Thomas had actually been awake for 36 hours.

Thomas then had to outlast his six other opponents in the endurance challenges, where his sleepless state amplified the difficulty. Contestants had to shake quarters free from a heavy rig strapped to their chests, keep their eyes open for several minutes and silence bedside alarms while blindfolded.

“My body was on fire,” Thomas said. “It was exhausting and time just goes so slow when you’re doing those (challenges).”

Dr. Suzanne Stevens, who specializes in neurology and adult sleep studies at the University of Kansas Health System, watched an episode of “Awake.” She said she recognized how the challenges were specifically designed to take advantage of the contestants’ state of sleeplessness.

“It’s been shown that pain is more prominent in … a sleep-deprived state compared to a restful state,” Stevens said. “All of your muscles become less coordinated. You’re more likely to stumble and trip because of that incoordination.”

Outlasting every other contestant and making it to the final round, Thomas decided to play it safe and take home the $191,843 instead of going for the million. He said he planned on using the prize money to pay off his family’s debts; donate to veterans, animals, and children’s charities; and buy a new family vehicle.

One thing hasn’t changed since he went on “Awake”: He’s still living on next to no sleep. He said it’s just a habit for him.

“It’s kind of become something I’m a little proud of, but not to the point of being stupid,” Thomas said. “I’m still very aware that the body needs sleep.”