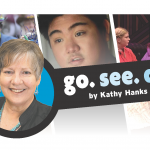 The stage at Theatre Lawrence was empty except for an old steamer trunk as a dress rehearsal for the musical “Quilters” began on Tuesday.

Then the cast of seven women slowly moved onto the stage and remained there through the entire production, playing numerous parts — both male and female — in a series of vignettes that retell a family’s history.

“It’s very minimalist,” said Widge Yager, director and choreographer of the production, which opens Friday night and runs through March 10. 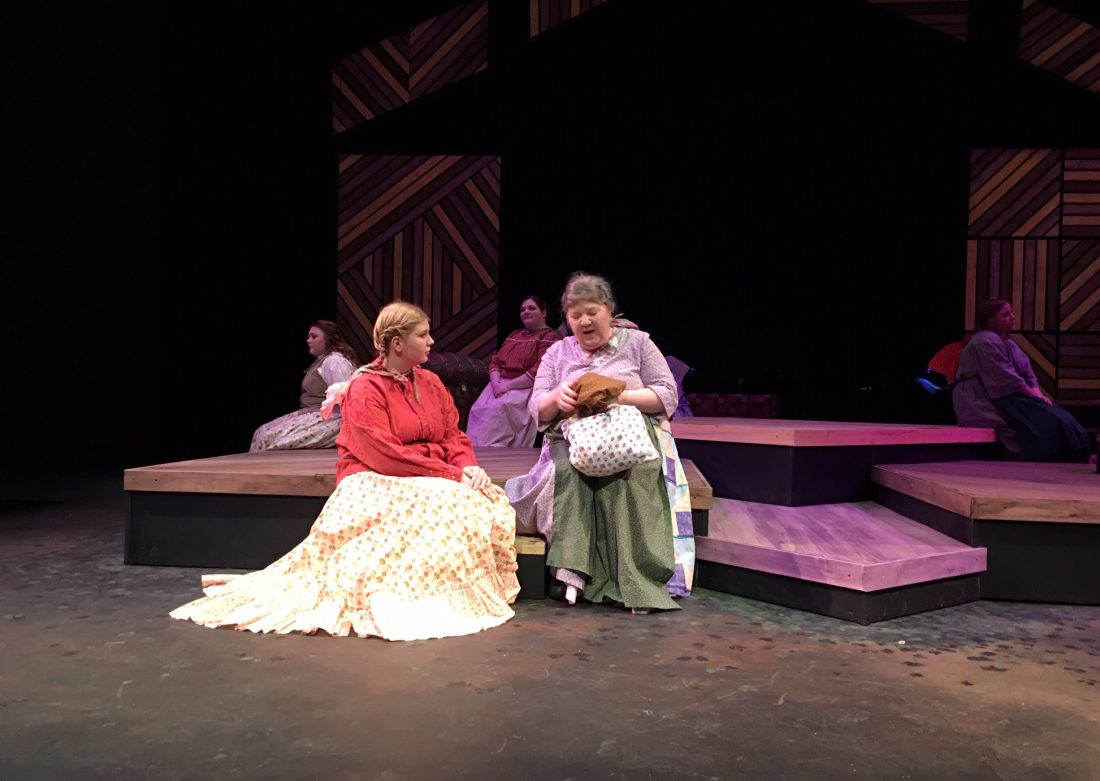 Kalen Stockton left, plays the role of a daughter having her first quilting lesson from her mother played by Susie LeGaul, in Theatre Lawrence’s production of “Quilters” which opens March 1, 2019, and runs through March 10.

After each of the musical’s vignettes — some silly, others tragic — the actors hold up a quilt block. Then, one by one, the 16 blocks — each one made by a local quilter — are stored away in the antique trunk. At the end of the show, they’re all brought together into one big quilt.

A piece of Yager’s own family history is up on the stage for the performance, too — the steamer trunk is one of her family heirlooms, she said.

Actor Susie LeGault, who plays roles ranging from a young child to an old woman in the show, is so committed to the production she travels from Emporia nightly for rehearsals. In 1987, she also acted in a production of “Quilters” when she lived in Wisconsin, but she says her life experience since then has given her a new perspective on the play and its themes of family.

Award-winning artist and performer to speak 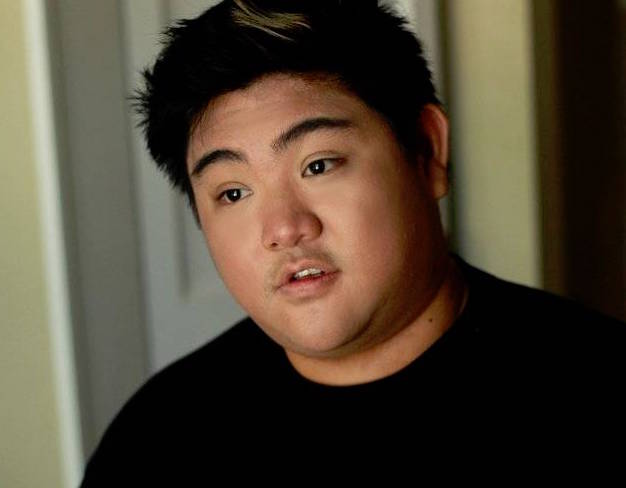 Hieu Minh Nguen will be talking about his book and signing autographs at 7 p.m., March 5, 2019, Liberty Hall.

Award-winning poet and author Hieu Minh Nguyen will be reading from his latest book, “Not Here,” at 7 p.m. Tuesday at Liberty Hall in an event presented by The Commons and the Raven Bookstore.

A queer Vietnamese-American poet, Nguyen is a Kundiman fellow and a poetry editor for Muzzle Magazine. In addition to “Not Here,” he is the author of “This Way to the Sugar, which was a finalist in the Minnesota Book Awards and the Lambda Literary Awards.

“Hieu’s book ‘Not Here’ is an inviting yet devastating look at a difficult upbringing, discussing traumatic events and feelings with memorable sharpness and power,” said Danny Caine, owner of the Raven, in an email to the Journal-World. “Yet Hieu’s charisma and voice ensure this is a welcoming read, a compelling book, a wonderful way to spend a hundred pages or so.

“He also knows how to grace a stage; he’s an amazing performer, and I can’t wait to see him read,” Caine added.

The event is free, but tickets are necessary and available at the event’s page at universe.com.

Join the brass band, follow along or just come out and watch the annual Mardi Gras parade at noon Tuesday in downtown Lawrence. The event begins at Aimee’s Coffeehouse, 1025 Massachusetts St. Everyone is welcome to join the parade, with or without an instrument.

• Feb. 13 — Mardi Gras is in March this year, and Lawrence musicians plan to keep parade alive

Do you have an event you’d like to share? Please email Kathy at khanks@ljworld.com Submitting information does not guarantee it will be included in future articles.