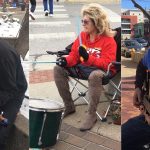 From left, street musicians Ricki Dregg, Tamara Jeffries and Erik Wray perform for passersby on downtown Lawrence sidewalks during all types of weather in January 2019.

Ricki Dregg decided against wearing the usual black derby and donned a stocking cap while strumming his guitar and singing a Pink Floyd tune on a biting January morning on Massachusetts Street.

Dregg is one of several street musicians or buskers who year-round bring eclectic sounds to Lawrence’s downtown, where performing on the street is legal. It is not considered panhandling if the performer is not verbally asking for money, according to city ordinance.

For the past seven years, Dregg, a 54-year-old Desert Storm veteran, has been singing in downtown Lawrence no matter the season. He has his special spot in front of Brits, 929 Massachusetts St.

The store owner, Sally Helm, says Dregg sometimes comes into Brits to warm up. He has built a relationship with the employees. They even had him play for a gig they hosted.

Other shop owners along the block, such as Essential Goods, Au Marché and Calamity Jane’s, are welcoming, Dregg said. Sometimes, when the cold gets to him, he steps inside their buildings for a break. 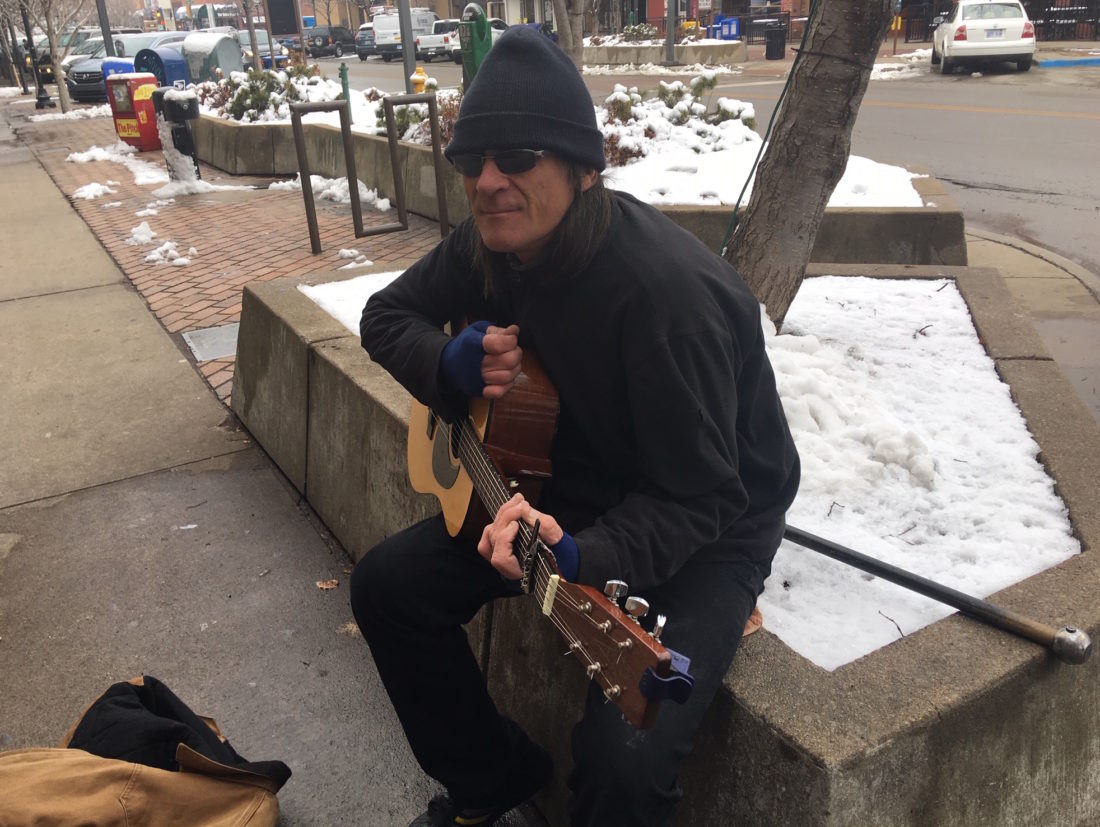 Over the past seven years, Lawrence street musician Ricki Dregg has become a familiar face outside of Brits, 929 Massachusetts St., where he likes to perform. He is seen here on Jan.15, 2019.

The location has the right amount of shade in summer and sunshine in winter, Dregg said, explaining why he can always be found in the same spot playing classic rock.

“I developed a fan club,” he said. “If someone sits here it will aggravate fans who come to hear me.”

The heart of winter is a difficult time for a street musician, especially when it snows or rains and people stay indoors. But Dregg wants to be playing music on the street; it’s his bread and butter.

“I call my guitar my golden goose,” he said, laughing.

That’s why he was out on a recent morning when the day’s high temperature was expected to reach 40 degrees, the warmest it would get all week. He sat on a concrete planter, his guitar case open by his feet, a rock preventing the single dollar bill inside from blowing away.

Busking is Dregg’s only form of income.

After two failed marriages, he came to Lawrence from Arkansas, down on his luck. The U.S. Department of Veterans Affairs helped him get a small studio apartment where he lives with six guitars — five that he plays and one he’s repairing.

Despite the positive response he receives from passers-by, he admits not everyone he meets on the street is a fan.

“I get looks; you can read peoples faces,” Dregg said. But he shrugs them off.

“Led Zeppelin didn’t sing songs that everybody liked; they left that to Barry Manilow.”

On a late afternoon while the beginnings of a vivid pink sunset graced the sky, Richard Black, 60, played his guitar while his wife, Tamara Jeffries, 58, kept the beat on a drum she had salvaged from a trashcan.

The couple prefer to play on the corner of Eighth and Massachusetts streets next to Noodles & Company. 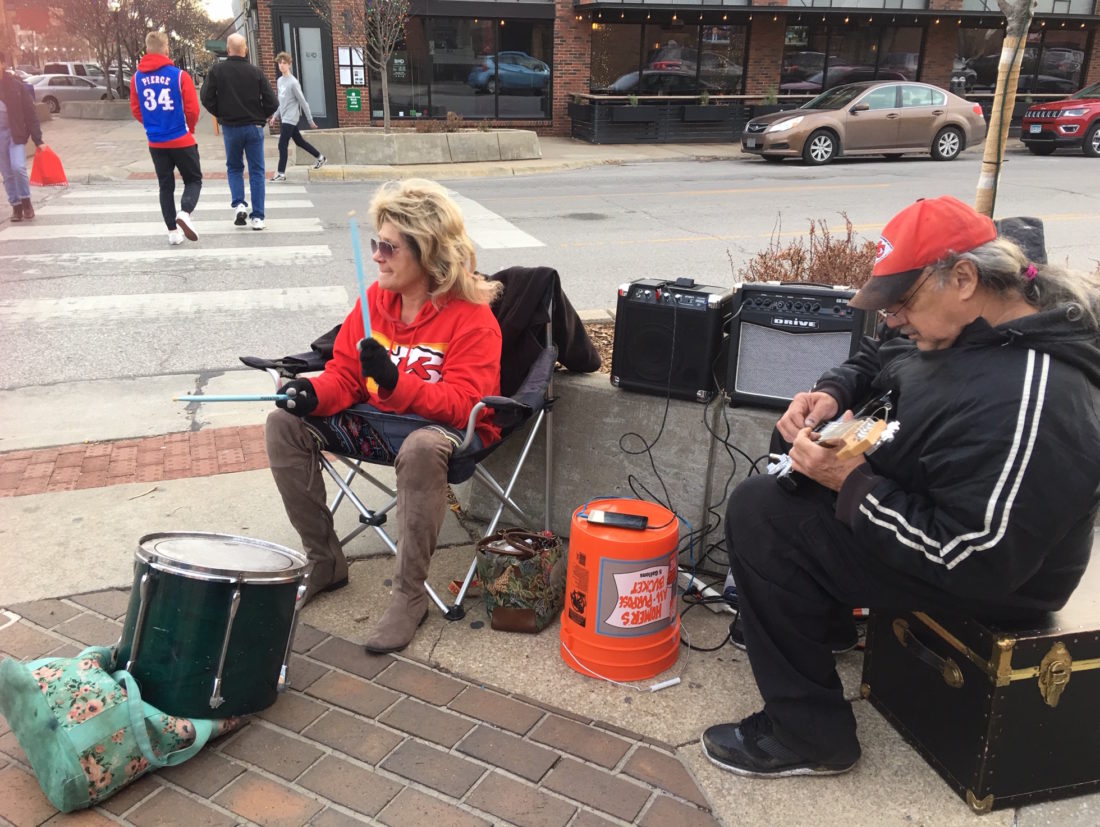 Tamara Jeffries and Richard Black claim the corner of Eighth and Massachusetts streets next to Noodles & Company in downtown Lawrence, to play their music on Jan. 9, 2019.

“This is our spot,” Jeffries said, taking a break from her drumming. “We are either here or at South Park.”

She said they usually tried to bring food to feed the homeless. Sometimes they’ll give out coats or blankets to those in need. She said they just wanted to share what they have, including their music.

They’ve had something of a tumultuous relationship, Black said. They were married and divorced, then found each other after a decade apart. They have remarried.

“Twice in one lifetime,” Black said, is how they describe the relationship.

“At our age, we spent our lives working and taking care of family,” Jeffries said. “We realize we’re still young and we want to spend time improving on our music.”

They both love to sing and play by ear.

‘A nice place to exist’

With a lull in the frigid weather, the 34-year-old drove over from Kansas City, Mo., to sit on a low stool on the corner outside Merchants Pub & Plate, at 746 Massachusetts St., and strum melodies. He performed inside the venue on New Year’s Eve with Mike Smith. When they perform together they are known as DuoTone Kansas City. 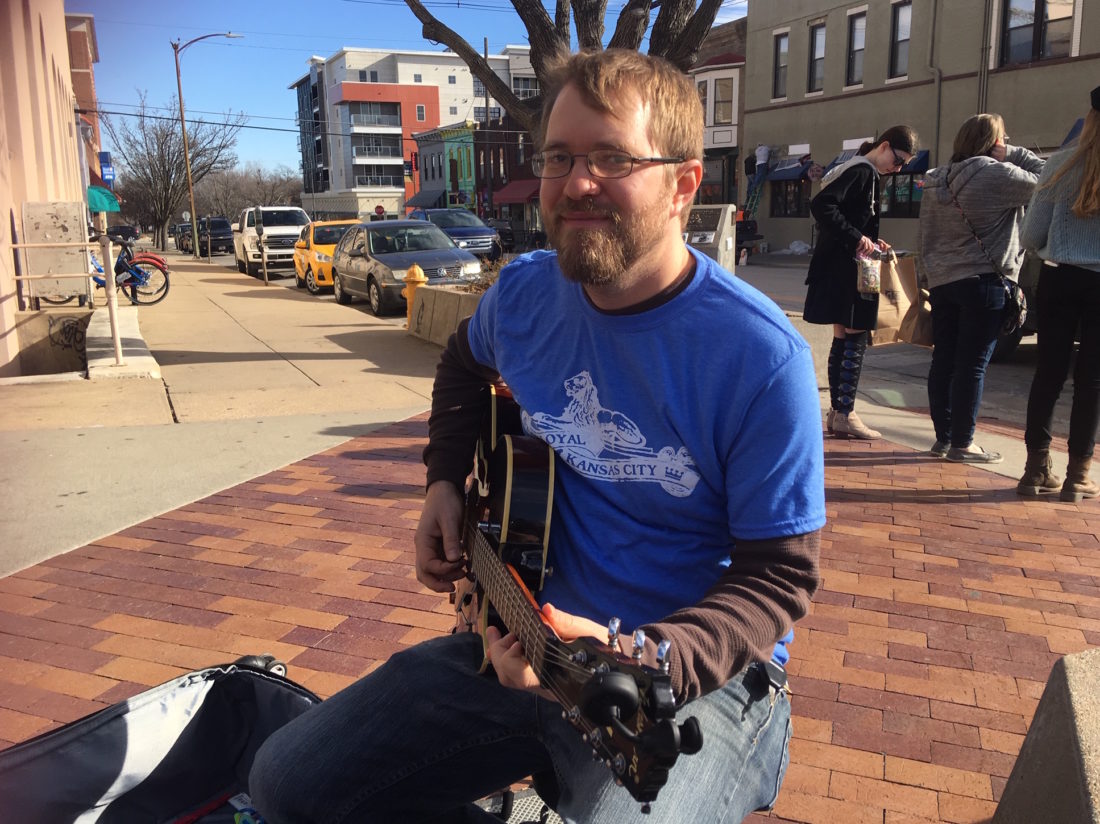 He chose to live in Kansas City because of its active jazz scene; however, he felt more comfortable strumming his guitar on Massachusetts Street.

He kept his large suitcase open on the sidewalk for tips.

“It’s safer here and the people are nice,” Wray said. Though he wouldn’t say how much he makes in tips, he did say it made it worth the drive over.

He had chased the music scene to Austin, Texas, New Orleans and even Minneapolis, always keeping his day jobs. But, after his heart was broken in Wisconsin the native Kansan headed home.

Several years ago he made the decision to quit his low-paying factory job and try to make it as a musician.

“I decided if I was going to be poor, I wanted to do what I love,” he said.

He found he loved being a street musician.

“Lawrence by far is a good place to do this,” Wray said. “It’s a perfect size. It’s a safe place. Families walk up and down the street. They’ll have little miniature dance parties.”

Other times couples will dance to his music.

Wray finds mutual respect among the street musicians. He notices a flute player halfway up the block.

“It’s better for everyone if we spread out,” he said.

The only challenge comes when he has to use the bathroom. He has to pack up his guitar and amplifier and carry it with him.

When he gets back, his spot might be taken by another musician.

He manages to live frugally with whatever money people toss into the open suitcase.

“I live a very small existence,” Wray said. “I have a cheap car that works most the time. I have a very small apartment. It’s in a bad neighborhood, but the neighbors are nice.

“No matter how bad the day is here, it’s better than the factory.”