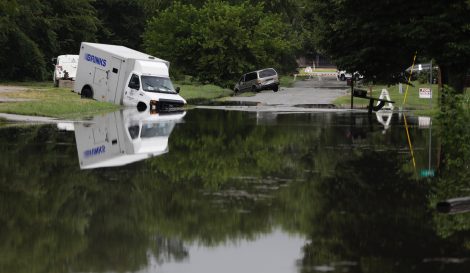 An armored truck is caught in floodwaters after a rainstorm in this Aug. 1, 2019, file photo.

With an annual rainfall total more than 9 inches above normal, 2019 was the wettest year in Lawrence since the National Weather Service placed a station at the local airport in 1998.

Daniel Reese, a meteorologist for the National Weather Service office in Topeka, said the airport received a total of 47.69 inches of rain over the past year, including the 1.14 inches of rain that fell on Saturday. The Lawrence area isn’t expected to see any more precipitation in 2019, he said.

Reese said this year’s total is the highest in the 22 years that the National Weather Service has had a weather station at Lawrence Municipal Airport — the Topeka NWS office does not have access to Lawrence weather data before 1998. Previously, the wettest year on record was 2009, with a total of 44.44 inches, according to data from the National Oceanic and Atmospheric Administration. Lawrence’s average annual rainfall is about 38.4 inches, according to the National Weather Service.

Most of the rainfall came during the spring and summer months, which brought a series of severe storms through the Lawrence area. Among those was a storm on May 28 that produced an EF-4 tornado, injuring more than a dozen people and causing $22 million in damage in Douglas County, as the Journal-World previously reported.

Flash flooding was a concern during the spring and summer, as well — one storm in early August dropped as much as 8 inches of rain on some parts of Douglas County, forcing some roads and trails to close and necessitating several water rescues, the Journal-World reported.

While 2019 was an extreme year for rainfall, it wasn’t unusual in terms of temperature.

Reese said the average annual temperature this year for northeast Kansas, as measured in Topeka, was 55 degrees, which is 0.1 degree above average.

“It was a wet year, but normal temperature wise,” he said.

The hottest temperatures recorded at the Lawrence airport this year were the 101-degree afternoon highs on July 19 and 20, Reese said. The only other triple-digit day was July 17 when the high was 100 degrees.

The coldest 2019 temperature recorded was minus 5 degrees on March 4, Reese said.