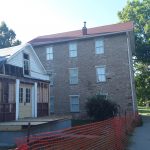 Baker University is renovating the 162-year-old Palmyra post office, pictured at left. The structure was once located on the Santa Fe Trail but now sits on the school's campus next to the Old Castle Museum, at right.

The committee is charged with developing proposals on how the community can mark the event and suggesting how much funding the city should provide for that effort. On the committee will be Peach Madl, owner of The Lodge Motel, and representatives of the Baldwin Recreation Commission, Baldwin City Library, Lumberyard Arts Center, Maple Leaf Festival Committee and Santa Fe Trail Historical Society. Simoneau said the committee would meet in January with the City Council.

At a November City Council meeting, Councilmen Tony Brown and Brian Cramer proposed that in addition to helping plan a communitywide celebration on or near the Sept. 22, 2020, anniversary date, the committee work with the Lumberyard, Maple Leaf Festival Committee, rec commission, Chamber of Commerce and other community organizations to incorporate the sesquicentennial theme in regularly planned 2020 activities. That would help the celebration reach more residents and spare the committee from burning out on planning one big event, they said.

The City Council has approved a sesquicentennial symbol that will be displayed on logos marking the event and on a commemorative coin that will be made available to residents.

Baldwin City is the last of Douglas County’s incorporated municipalities to celebrate a sesquicentennial. Lawrence and Lecompton were founded in 1854 and Eudora in 1858.

Baldwin City’s roots, however, extend into the 1840s and the Palmyra townsite, which sprung up on the Santa Fe Trail. By the 1860s, Palmyra prospered enough from trade from the trail to support a general store, blacksmith shop, inn and post office.

In a July 13, 2019, Journal-World story on the restoration of the old Palmyra post office, Sara DeCaro, Baker University archivist, said a meeting of Methodist ministers in Palmyra led in 1858 to the founding of Baker as the first college in Kansas on donated property about a mile south of the Palmyra townsite. As the years passed, residential and commercial growth sprung up around campus, and what was to become Baldwin City supplanted Palmyra.