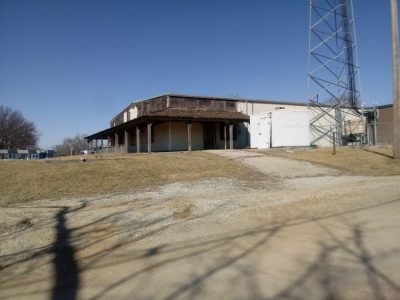 The old restaurant just north of U.S. Highway 56 in Baldwin City should be gone by the end of the year after the Council approved Dec. 3, 2019, a bid from Lloyd Builders, of Ottawa, to demolish the building and construct a new police station at the site.

The Baldwin City Council has approved a $1.35 million contract to construct a new police station that Mayor Casey Simoneau said will serve the community for half a century.

At its Dec. 3 meeting, the Baldwin City Council approved a bid from Lloyd Builders, of Ottawa, to tear down the former restaurant on city-owned property at 203 First St. off U.S. Highway 56 and construct a new 5,330-square-foot police station.

Lawrence architect Jay Zimmerschied, who is working with the city on the project, said the bid Lloyd Builders submitted for $1.4 million was the lowest of 10 that the city received for the project. He and the city worked with the Lloyd Builders representations after the bids were opened Nov. 14 to identify $50,000 in savings, which trimmed the bid to the $1.35 million approved at the meeting, Zimmerschied said.

In an phone interview Saturday, Simoneau said the contractor has indicated the restaurant at the site will be demolished by the end of the year and the new station should completed by late summer.

“The new station should be up and going in less than a year,” he said. “I think we’ve been talking about a new station for 10 years.”

While presenting the bids to the City Council, Zimmerschied said he started working in 2013 with the city on plans to replace the 1,200-square-foot converted flower shop that has served as the city’s police headquarters for decades. He presented several options to the city in 2015. The most applicable of those options to his design for the chosen site was an estimate to build a 7,287-square-foot station on the city’s old public works yard south of the 600 block of High Street. That option had a total project cost of $2.4 million, he said.

Zimmerschied told the council that a cost associated with the chosen site not applicable to the previously reviewed downtown locations was the need for a parking lot. But he also noted the selected U.S. 56 site would not create more demand for already limited downtown parking.

Simoneau said the Baldwin City Police Department and Chief Michael Pattrick were extensively involved with the design of the new headquarters. He said that the work resulted in cost-efficient plans that will provide for the department’s needs for decades.

“The chief and the department really researched the building,” he said. “We relied on them to tell us what to build. We’re building something to serve our needs for the next 50 years. This will be a long-term solution to our needs.”

At Simoneau’s suggestion, the City Council agreed to buy the former restaurant and surrounding property in March 2018 for $260,000. The intention at that time was to renovate the restaurant into a police station. However, a subsequent inspection of the restaurant by a structural engineer revealed that repurposing the building would require about $200,000 more than the approximately $1 million the city has available for the project.

After reviewing the suitability of building a police station on other city-owned sites, the City Council agreed in September to seek bids to demolish the old restaurant and build a new police station at the 203 First St. site.