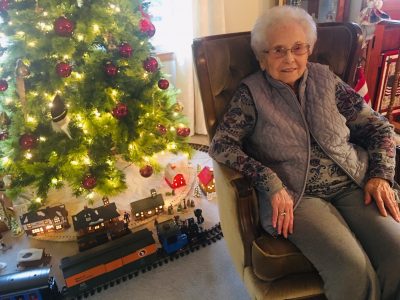 Mable Durrant, 95, sits beside her Christmas tree, complete with a model train running around it, in her Lawrence living room on Nov. 29, 2019. Durrant worked for the Union Pacific Railroad during World War II as a telegraph operator.

Mable Durrant was a petite young woman, but that didn’t stop her from standing by the railroad tracks and holding out messages to enormous passing trains, doing her part for the war effort back in 1942.

Mable, now 95, had just graduated from high school in Arkansas during the height of World War II when she heard that the Union Pacific was training women to be telegraphers.

“All the boys were getting drafted so they started taking girls,” Mable said. She headed to Denver to begin training, learning Morse Code, in which letters of the alphabet are represented by dots and dashes. She also took a course in cursive writing, because part of her job was to transcribe the telegraph messages into a handwritten note for the passing train. 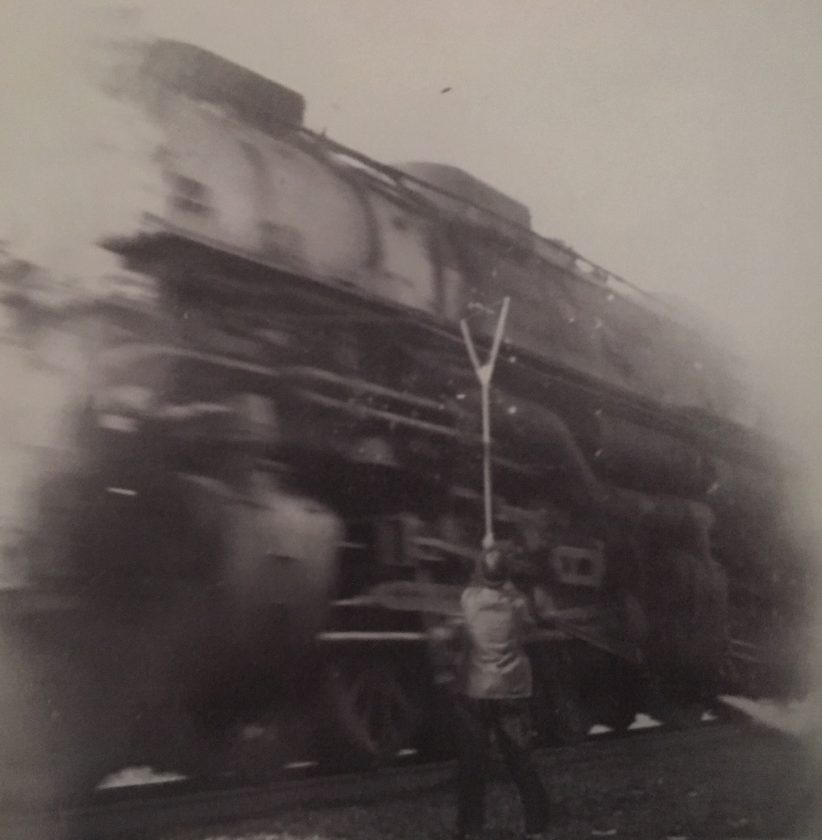 Mable Durrant is seen preparing to pass along a message to a passing steam engine sometime in the 1940s. The train didn’t stop; the engineer would simply reach out the window to grab the message.

Trains didn’t stop; the engineer would just reach an arm out the window, and 5-foot-2 Mable would hold up a 6-foot pole that looked like a giant slingshot. The handwritten message was tied to the pole. The engineer had to grab the note as he passed at a swift clip.

“We didn’t have telephones as we have now and that’s how we got messages,” she said. They received telegraphed train orders for the crew from a dispatcher in Cheyenne, Wyo.

Mable was sent to Morgan, Utah, for her first job. She still remembers attempting to hand off the first message.

“I was excited. But the closer the train got, the bigger it got, and I kept backing up and backing up. By the time the train got to me, I was back at the depot,” she said.

Thankfully, the depot agent expected Mable to be hesitant the first time and stood along the track with another pole with the same message. She got it right the next time.

The UP moved her around to locations in Wyoming and Utah.

While working in Wyoming she remembers walking through the mile-long Altamont and Aspen railroad tunnel near Evanston.

She was the relief operator, and the stations were at either end of the tunnel. She had to walk through the dark tunnel to the other end to relieve someone. But first, she called the dispatcher in Cheyenne to make sure the train wasn’t coming.

“He would say if it was clear. One day he made a mistake,” Mable said. “I got in the tunnel. It was dark. I had a lantern, and I kept feeling the pressure come towards me. There was a train coming.”

She knew she had to find a safety hole along the wall in the tunnel.

“I finally found one, just as the train passed by,” she said. The dispatcher thought she was in the tunnel dead. “They never let me walk through the tunnel again. They took me by motor car from one depot to the other.” 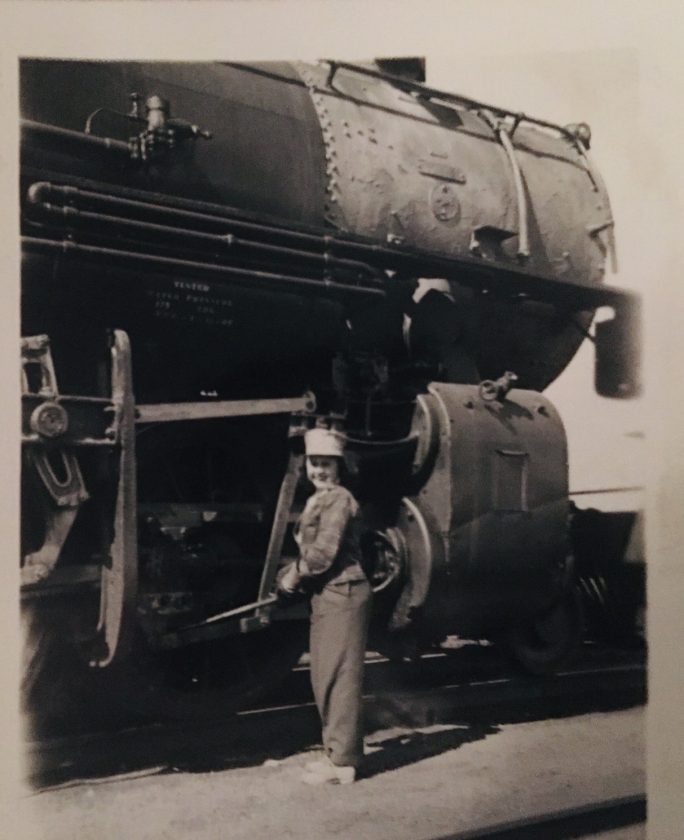 Mable Durrant, standing near a Union Pacific engine, when she worked as a telegrapher for the railroad during World War II.

While on the job, she met Vern Durrant. His father and grandfather had worked for the UP, and Vern had taken leave from the railroad to fight in World War II. When he returned, he would come to the depot to send messages and pick up orders.

She remembers that Vern was very handsome but also bashful.

“The depot agent told him, ‘If you want to get friendly with that little girl, you got to talk,'” Mable said.

So he started to talk, but it took six months before he asked her out. Once they were married and she was pregnant with their first child, she retired from the railroad after only seven years. However, it remained a big part of her life. Vern retired after 45 years with UP. Three of her four children would also have long careers with UP.

Over the years, Mable said the UP would move them up and down the tracks, eventually settling them in Lawrence. When she was ready to return to work, she had a brief stint at Hallmark. Then she went to work for the Hercules Powder Plant in De Soto, which later became the Sunflower Army Ammunition Plant. She worked there until it closed in 1971.

“That’s when I went to school to become a nurse,” Mable said, laughing. “I’m a jack of all trades.”

Mable was about 70 when she retired from Watkins Memorial Health Center on the University of Kansas campus. 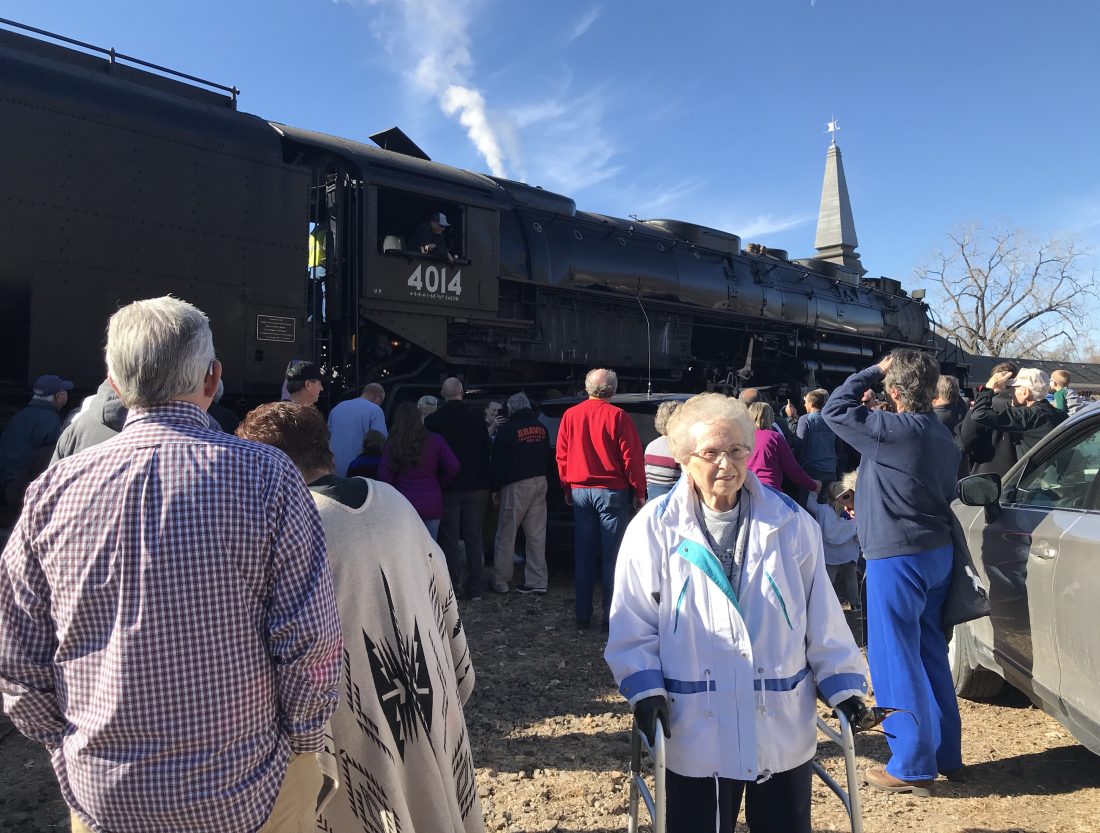 Mable Durrant recently was in the crowd Nov. 19, 2019, when the steam locomotive Big Boy No. 4014 made a stop at the old Union Pacific depot in North Lawrence. It brought back memories of when she was a telegrapher for the UP.

Recently, she was in the crowd when the steam locomotive Big Boy No. 4014 made a stop at the old Union Pacific depot in North Lawrence. It brought back memories of a brief but exciting time in her life, when she mustered the courage to stand close enough to a swiftly moving steam engine to hand off a message.