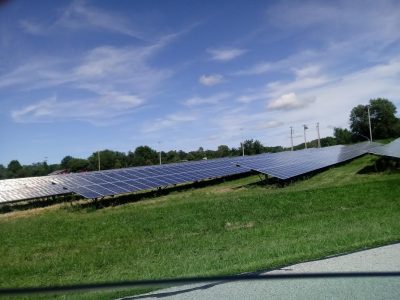 On sunny days, Baldwin City will soon be using electricity generated from a solar panel array in its public works yard.

The solar power array, which Westar Energy built on a gently sloping southward hill near the city’s electrical power generating plant, is set to come online within days, said Rob Culley, Baldwin City’s electrical production director. The city and Westar will mark the occasion with a ribbon cutting at 5:30 p.m. Tuesday at the public works yard, 1100 Orange St.

“Westar is doing its final testing,” Culley said Friday. “I hope and expect it to be online by the ribbon cutting.”

In July 2018, the city entered into an agreement with Westar to build the solar farm on about 2 acres of the public works yard. Under the agreement, the city will be the sole customer of the power the solar panels produce.

Solar power fits neatly into the city’s existing energy portfolio, Culley said. The city owns its own electrical distribution system and has a power plant capable of supplying the city with electricity. Using the plant, however, costs more than simply buying electricity from Westar. Usually, the city only uses the plant in emergency situations or when its contract with Westar requires it, such as during especially hot days and other periods of peak demand.

“Baldwin City has been on the cutting edge of renewable energy,” he said. “When you add the solar power to our wind-powered electricity and hydroelectric capacity, 30% of our from power will be from renewable, green sources.”

The city’s agreement with Westar sets the city’s cost for power from the solar farm at 5.6 cents per kilowatt hour for the next 30 years, Culley said. While he noted that’s about 0.7 cents more expensive than the wind and hydroelectric rates, he said it made sense over the long term.

The Baldwin City Council selected Westar for the project from among five companies that responded to a request for proposals.

Westar spokeswoman Gina Penzig said the Baldwin City solar power array is the first solar project the company has done for a local government or public utility. However, it is developing a similar project with the city of West Plains, Mo., and has had inquiries from other municipalities and public utilities, she said.

Like Baldwin City, most of those cities have the ability to generate power on their own, Penzig said.

“There could be partnerships with cities like Lawrence that don’t have that capacity, but those agreements would look much different,” she said.