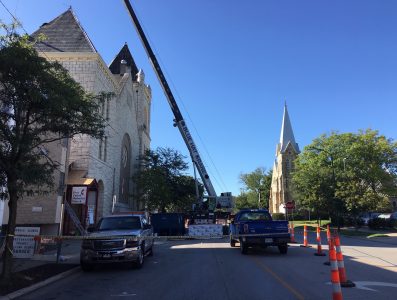 The restoration work at First United Methodist Church has temporarily blocked northbound traffic on Vermont Street near 10th Street. The street is expected to be blocked for about two weeks. However, the crane will be gone over the weekend for KU's home football game.

Construction workers encountered bats in the belfry as they began work this week tearing shingles off the bell tower high above Lawrence’s First United Methodist Church.

“They were chasing bats out the first day up there,” said Marc Ridenour, the facilities manager at the church, 946 Vermont St.

The workers are replacing the 129-year-old slate roof on the limestone church’s two towers, using a crane that reaches 127 feet in the air.

The work has temporarily blocked northbound traffic on Vermont Street near 10th Street. Ridenour expects the street will be blocked for about two weeks. The city has required that the crane be moved over the weekend for the University of Kansas’ first home football game Saturday, which will attract a lot of traffic to the downtown area.

The church, designed by John G. Haskell and constructed in 1889, is listed on the National Register of Historic Places. Haskell also designed the Douglas County Courthouse, which was built with limestone from the same quarry, and the English Lutheran Church at 1040 New Hampshire St. A grant from the Douglas County Heritage Conservation Council for almost $30,000 will go toward restoring the bell inside the tower.

The “A flat” bell is rung, by a long rope, at 10:20 a.m. every Sunday and can be heard throughout the neighborhood. It will be dismantled in the coming weeks and shipped to the Verdin Company in Cincinnati for refurbishing. Ridenour estimates that the bell will be gone for about two months.

The roof on the two towers will be replaced with Vermont slate. It is just the beginning of a large historic restoration project, Ridenour said. A 2018 capital campaign called “Forever First” raised $1.2 million to preserve the church’s exterior. Along with fresh paint, a masonry phase will replace and repoint the original stone. Plus, the iron railings around one tower will be rebuilt.

“We are doing a historically accurate restoration and hopefully making it last for the next 100 years,” Ridenour said

The Rev. Tom Brady, the senior pastor at the church, said the restoration project was energizing the congregation.

“It’s almost a 130-year fixture in downtown Lawrence, and it represents stability, vitality, and strength to our church,” Brady said.