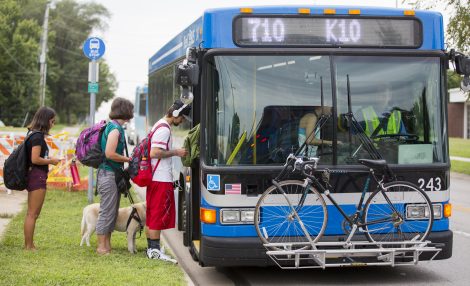 Bus riders heading to Johnson County Community College get on the K-10 Connector at the 19th Street and Haskell Avenue pickup spot on Tuesday, Aug. 30, 2016.

The K-10 Connector bus service has changed the stops it makes in Lawrence and is no longer serving the bus stop at 19th Street and Haskell Avenue.

The bus route, which runs along Kansas Highway 10 and includes stops at the University of Kansas’ Lawrence and Edwards campuses and Johnson County Community College, began operating for the fall semester this week. According to an announcement on the RideKC website, the stop at 19th and Haskell has moved to the Lawrence College and Career Center at 29th Street and Haskell Avenue, which can be reached via Lawrence Transit Route 15.

The bus will continue to make stops at the KU Park and Ride lot and on KU’s main campus, according to maps of the route.