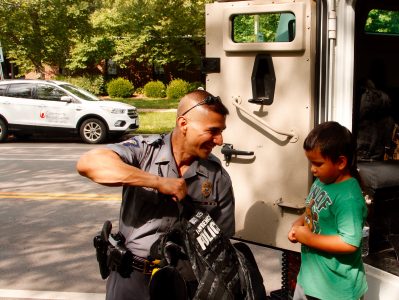 Shawn Gross, a public information officer with the Lawrence Police Department, lets Ralph Sitting Up, 5, of Lawrence, check out a bag Saturday, Aug. 10, 2019, at the community safety fair at South Park.

With booths, prizes and tours of emergency vehicles, Saturday’s Community Safety Fair in South Park was a lot of fun for 7-year-old Rowan Bull — and also a great learning experience.

“I learned a lot, like where they keep things in the ambulance,” Rowan said.

The Tulsa, Okla., girl was visiting her grandmother, Teri Lutz, of Lawrence, before starting school. At the fair, Rowan not only got a quick introduction to first responders and their equipment, but also scored a bag full of goodies from the booths, Lutz said.

Deputy Charlie Cooper, public information officer with the Douglas County Sheriff’s Office, said Rowan had just the kind of experience the fair’s organizers hoped children and parents would have at the fair, which always takes place on the last weekend before schools in the county open for the year. It was designed to teach youngsters more about emergency services and give them some reminders of basic safety practices, she said.

“The value is to make the community aware of all the programs out there providing public safety and those that provide services to support families in the county,” Cooper said of the fair, which is sponsored by the Sheriff’s Office, the Lawrence Police Department and the Lawrence-Douglas County Fire Medical Department.

All of those agencies had vehicles at the fair to show off to the kids, and there were booths from Bert Nash Community Mental Health Center, the Willow Domestic Violence Center and the Lawrence school district, as well. 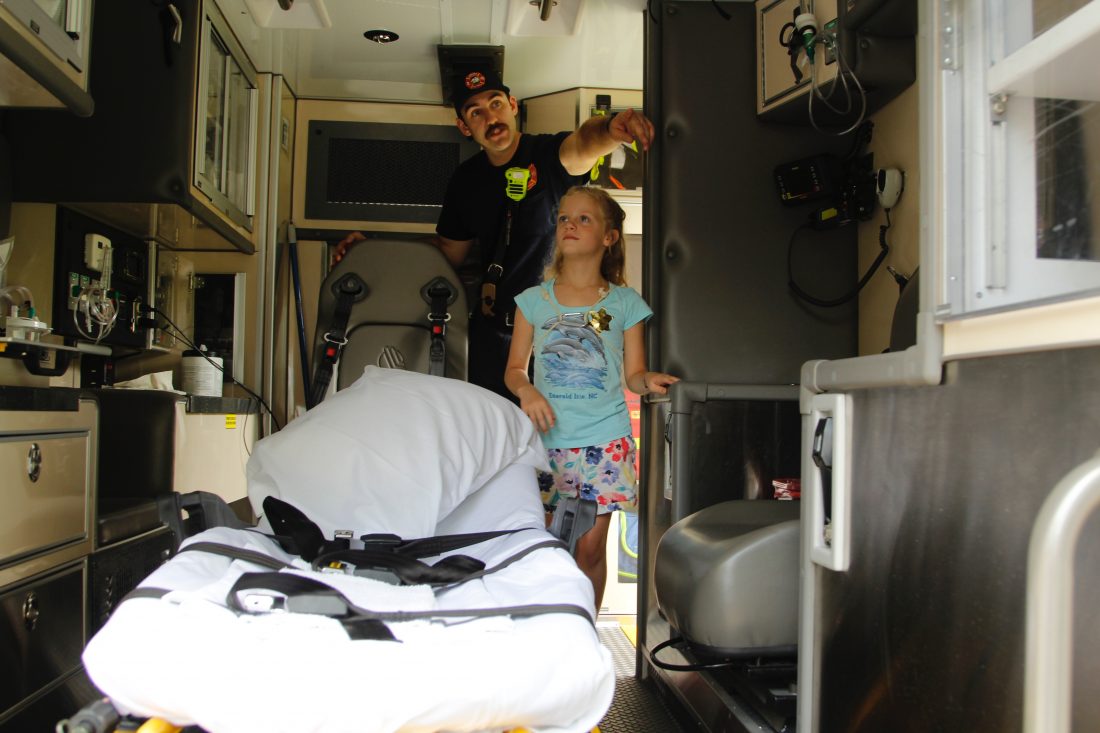 Paramedic Brian Murdock points out to Rowan Bull, 7, of Tulsa, the placement of supplies in a Lawrence-Douglas County Fire and Medical ambulance at the Saturday, Aug. 10, 2019, community safety fair in South Park.