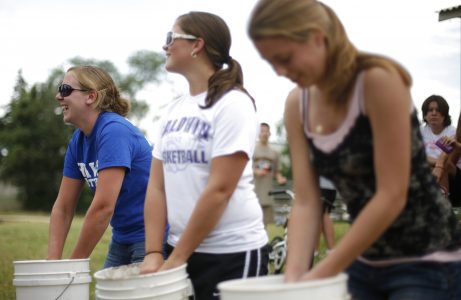 Contestants shell corn during a past Vinland Fair old-time farm skills contest. This year's Vinland Fair will be Thursday, Friday and Saturday at the Vinland Fairgrounds in Vinland.

Stretched out near the cattle show ring Saturday at the Douglas County Fair, a relaxed Kyle Norris revealed his favorite feature of the county’s other fair.

“The pies,” the Vinland Valley 4-H Club member said. He and his sister, Claire Norris, will be showing the heifers they took to the county fair at the Vinland Fair livestock show, but Kyle said the three-day fair was a laid-back final chance to enjoy summer with his friends before starting school.

The Vinland Fair returns Thursday through Saturday to the fairgrounds in the hamlet of Vinland, about 8 miles southeast of Lawrence.

Stacy Lister, who was with her Vinland Valley 4-H Club children Saturday at the Douglas County Fair, said she would contribute to the pies at the Vinland Fair.

The pies she really enjoys are the “grandma pies” Vinland community members bake for the fair, Lister said. She is also a big fan of the evening meals served at the fair, especially the traditional chicken and noodle supper the Vinland FCE makes each year. It will be available on Friday evening.

The meals contribute to the homespun atmosphere at the Vinland Fair, which is much different from the Douglas County Fair it follows every year, Lister said.

All events at the Vinland Fair are free, including the tractor pull set to start at 1 p.m. Saturday. The event draws contestants driving antique tractors as well as custom-modified pulling machines. Lister said her family always watches the action, and her husband, Ryan, sometimes enters his own tractor.

The Vinland Fair has neither a carnival nor vendor booths, Lister said. Instead, the Vinland Fair very much encourages attendees to entertain themselves. That is especially true for children, Lister said. The fair has has an afternoon of children’s games and activities, including sack races, tug of war and bicycle races, starting at noon Friday. Among other events catering to youngsters is the children’s pet parade at 11 a.m. and toy tractor pull at 2 p.m. Saturday.

Adults, too, are encouraged to try their hand at old-time farm skills like bale throwing, nail driving and horseshoe pitching at 2 p.m. Thursday.

One of the annual highlights of the fair is the talent show, set to start at 6 p.m. Thursday on the fairgrounds stage. In the past, the show featured such things as a fortune-telling chicken, a contortionist and circus act, as well as area musicians.

Bands will also take the stage at 7:30 p.m. each day. The Alfred Packer Memorial String Band will make its annual Vinland Fair appearance on Thursday; Danny Moore and Barbwire on Friday; and Jeff Nelson and Back-Atcha on Saturday.

The Vinland Fairgrounds are at 1736 North 700 Road in Vinland. Vinland is southeast of Lawrence on County Route 1055, which is Haskell Avenue in Lawrence.