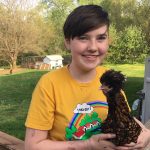 Addison Leslie is pictured with her beloved Polish hen, Eilen, at her home west of Lawrence on April 24, 2019. Addison looks forward to saying goodbye to her chicken chores while she spends a week at Camp Hope in Barton County. The camp is free for those ages 5 to 17 from across Kansas who have or had cancer.

As much as Addison Leslie loves her chickens — especially Eilen, a Polish hen — she’s happy to leave them every June for a week at camp.

There is something special about Camp Hope, says Addison, 13, who will be returning for her fifth year.

She will be one of 70 kids ages 5 to 17 from across Kansas who have or had cancer attending the free camp. It’s located 5 miles northeast of Great Bend at Camp Aldrich, near Cheyenne Bottoms. This year, the campers will arrive on Father’s Day, June 16, and leave the following Saturday.

Addison could only think of one negative about the camp on a recent evening as she sat on the deck of her family home west of Lawrence.

One year her mother, Janine Leslie, got the dates mixed up on the calendar and they arrived a day early. That worked out just fine, according to Addison.

Her mother doesn’t drive her to camp anymore. Instead, Addison is one of almost 30 kids from the Kansas City, Topeka and Lawrence areas who arrive by a chartered bus.

Along with the campers, 120 volunteers are on hand to make certain the campers have fun, are safe and stay healthy, said Barb Keltner, of Eudora, who has been volunteering at the camp since 1992. Volunteers include a full medical staff — doctors, nurses, even mental health personnel and two pharmacists — who hand out meds at meals and bedtime.

Addison was 6 when she first attended the camp. It was a year after she had been diagnosed with Burkitt lymphoma, a very fast-growing type of cancer. Her cancer was discovered during a tonsillectomy. Because of the fast action of doctors at Children’s Mercy Hospital in Kansas City, Mo., she was in remission within a year, Janine said.

An eighth grader at Southwest Middle School, Addison relishes the opportunity to hang out with other kids who have been diagnosed with or are being treated for cancer.

“They get each other,” Janine said.

Camp Hope was established in 1983 by Donna Brown, a mother who lost two children, Kyle and Melani, to cancer. Along with the stress of their illness, her children experienced isolation because they couldn’t do the things other kids did during the summer, such as going away to camp. She wanted something more for kids who were struggling with various forms of the disease, according to the camp’s history on its website, camphopeheartland.com.

The camp is sponsored by KyMel Inc., a 501(c)(3) nonprofit. This year in July, the nonprofit will offer a second camp, Camp SIBsational, for the siblings of those who have or had cancer. It will be at Camp Wood near Emporia.

Camp Hope offers the typical camp activities such as archery, arts and crafts, field trips and a talent show. But Addison’s favorite has been the fishing derby and fish fry. The Kansas Department of Wildlife, Parks and Tourism stocks a pond with the fish for the derby, provides the poles and bait and even cleans the fish. The camp cook prepares the fish. 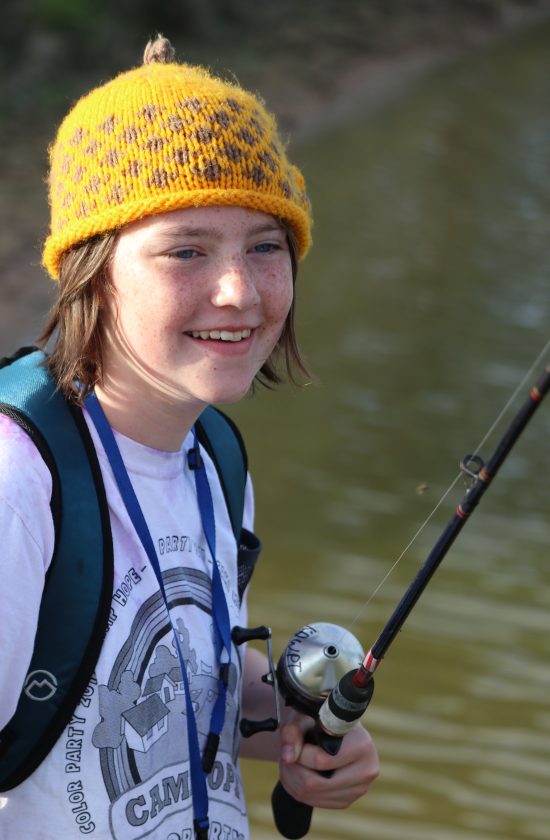 Addison Leslie’s favorite activity at Camp Hope is the fishing derby and fish fry. This contributed photo of Addison was taken several years ago.

She plans to attend the camp until she’s 17 and then wants to come back someday as a counselor. Several of the volunteers were once campers, including Chianna Hemken, the current camp director, a survivor of childhood leukemia who attended the camp when she was a child.

A similar connection has formed with Addison and the campers and counselors.

As she spoke, one of her roosters crowed, reminding her of another reason she loved camp.

“I don’t have to do chores,” she said with a smile.

Correction: A previous version of this story incorrectly spelled the family’s last name. The daughter and mother are Addison and Janine Leslie.