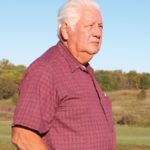 Russell Bradley is a 1962 graduate of Haskell Indian Nations University and the 2019 Outstanding Haskell Alumnus. A leader with the Kickapoo Tribe of Kansas, Bradley is involved with a dispute with the tribal council he has been a member of for 15 years.

The man Haskell Alumni Association named earlier this month as this year’s outstanding alumnus had been removed last September from his leadership role with the Kickapoo Tribe in Horton.

Russell A. Bradley, a class of 1962 graduate and the 2019 Outstanding Haskell Alumnus, has served on the Kickapoo Tribal Council, which is the official governing body of the tribe, for 15 years.

However, in September 2018, according to a news report on the Kansas Kickapoo Tribe website, the Tribal Council voted to remove Bradley as treasurer “due to a breach of fiduciary duty as the Tribe’s chief financial officer, in failing to preserve and report the financials of the Tribe when requested by the Tribal Council, and for sexual harassment.” The website provided no further information about the allegations.

Kickapoo Tribal Council Chairman Lester Randall spoke by phone with the Journal-World on Tuesday and confirmed that Bradley was voted off the council for those reasons.

Messages left for Bradley on his phone at the tribal office were not returned, nor was a message left with the Haskell Alumni Association.

Bradley, however, has taken the matter to the Kickapoo Tribal Court. Randall declined to make any further comments because of the pending hearing in that court.

According to Leanda Simon, administrator of the tribal court in Horton, Bradley filed a petition for “declaratory judgment and other relief” on Oct. 25, 2018. An upcoming hearing on a motion for summary judgment is set for Monday.

Vice chairman and tribal administrator Fred Thomas, also reached by phone Tuesday, said he was the only person on the seven-member council board who voted against removing Bradley from the tribal council.

“He was removed without due process,” Thomas said, although he would not elaborate on what he thought was unfair about the process.

Bradley is a veteran of the U.S. Army and a retired civil services superintendent of the U.S. Bureau of Indian Affairs. He has also worked for his tribe as the executive director of the Kickapoo Gaming Commission. He spent nine years on the Haskell Board of Regents, including serving as the board’s president, according to the news release from the Haskell Alumni Association announcing Bradley as the outstanding alumnus.

Thomas described Bradley as a perfect recipient of the Outstanding Alumnus award.

“Russell is very dedicated to Haskell,” Thomas said. “I don’t think there could have been a more outstanding person.”

Bradley will be formally recognized during a reception in his honor on May 9 at Haskell. He is also scheduled to speak during the university’s commencement ceremony on May 10.