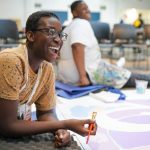 Jafiya Birdling, in the foreground, and LaDerrick Reeve, in the background, both of whom are apprentice artists at Van Go Inc., work on one of the three murals that will hang in the crisis rooms at LMH Health.

In order to create the murals that will soon adorn the walls of three crisis rooms in LMH Health’s emergency department, apprentice artists at Van Go Inc. had to take a crash course in calming.

Before they could start painting, the 19 young workers with the arts-based social service agency had to meet with the hospital staff to learn about the people who would be seeing their work: patients who are experiencing mental health crises. The artists brainstormed soothing ideas, eventually deciding to base their mural on the elements of sky, earth and water.

They even spoke with a color specialist, learning “what colors affect people’s moods and feelings,” said apprentice artist LaDerrick Reeve, 15.

“We started with lots of different words, ideas, and worked as a team to collaborate,” said Kristyna Smith, a social worker at Van Go who is helping with the project. 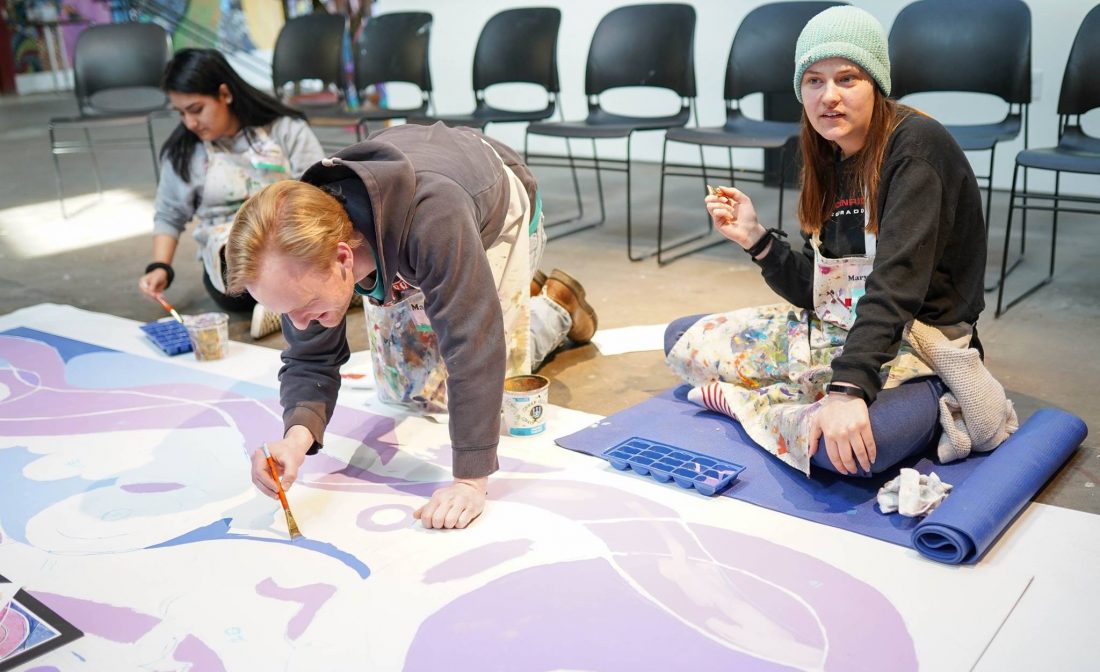 Van Go apprentice artists left Ayana Gutierrez and right, Mary Esther Bush, work on one of the three murals for LMH with Matthew Ferrier, a Van Go volunteer. The murals will be installed in crisis rooms in the ER of the hospital in early May.

To start out, the apprentice artists settled on a palette of cool pastels. Reeve said they spent some time just blending paints to create different shades of soft, soothing colors that would feel good for someone sitting in the room for a while.

They also decided on a wavy pattern without any harsh, sharp shapes, Reeve said.

On Wednesday, the artists were sitting on the floor of the Van Go workroom at 715 New Jersey St., painting pastel swirls onto the three 4-by-10-foot mural panels. By early May, their work will be hanging on the hospital walls.

Many projects by Van Go artists are visible around Lawrence, including the colorfully decorated benches that the artists produce each year for the nonprofit’s “Benchmark” program. Last year, the apprentice artists also painted a mural on the front of the Natural Grocers store at 1301 W. 23rd St.

But Rick Wright, Van Go’s art director, said this was the first mural the group had done for LMH Health.

A former Van Go employee played a big part in giving the nonprofit this opportunity, Wright said. Derrick Hurst, who was once a social worker intern at Van Go, currently works as the director of the Integrated Crisis Team at LMH Health, and he wanted Van Go’s artists to help create a soothing environment in the emergency department.

“They know we work with youth from underserved populations, and Derrick is the crisis team director at the hospital and was looking to do something with spaces they utilize for mental health units to make them calming and inviting for the patients,” Wright said.

Hurst believes the Van Go artists will bring a valuable perspective to the project.

“I immediately identified the unique and profound connection of engaging Van Go youth artists to work on a project designed to enhance the therapeutic environment of the Emergency Department,” Hurst said in an email to the Journal-World. “I’m excited for what the finished product can represent and change about the patient experience in the ED.”

By Wednesday, the apprentice artists had filled in the white space on the panels, and Wright said he thought they were making good progress.

“These are exciting murals,” he said.

Wright complimented the artists during their closing circle time, which they have at the end of every workday. He told them the next day’s work would be even more deliberate and thoughtful as they started blending the colors.

As apprentice artist Jafiya Birdling, a 15-year-old freshman at Lawrence High School, was putting his paints away for the day, he said he was satisfied with the afternoon’s work.

“I like the fact that something I’m making is going to make someone happy,” Birdling said.