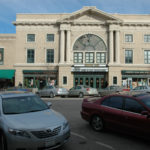 Liberty Hall, 644 Massachusetts St., is pictured in this file photo from April 2008.

A group of musicians from across the state will join the likes of Melissa Etheridge, Pat Metheny and Martina McBride as they enter the Kansas Music Hall of Fame.

Dues-paying members of the Hall of Fame vote each year for the inductees, selecting those who have contributed significantly to the music industry.

“We induct people from the state of Kansas and greater Kansas City metropolitan area,” said Allen Blasco, president of the Kansas Music Hall of Fame.

The 11th inductee is the Kansas state song, “Home on the Range.”

“It deserves to be inducted,” Blasco said. The song will be performed during the induction ceremony at 7 p.m. April 13 at Liberty Hall, 644 Massachusetts St.

Also performing that night will be Bill Glenn, Bureman & O’Rourke, Scatband, Fyre, the Secrets and Nation. Tickets for the event are now on sale through Ticketmaster or cash only through Liberty Hall. For more information, go to libertyhall.net.