Musical exploring the world of child gender identity will start in Lawrence, then move to NYC 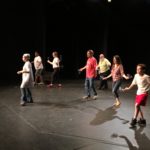 Cast members of “The Fantastical Dangerous Journey of Q” rehearse a dance for the show on Saturday, Sept. 1, 2018, at the Lawrence Art Center. Clara Kundin, in plaid, commissioned Ric Averill, center, to write the musical for The Rebel Playhouse.

A musical production focusing on a child dealing with gender identity issues is preparing in Lawrence before taking its act to the Big Apple.

Hazel Youngquist, a senior at Perry-Lecompton High School, portrays the titular Q in the upcoming musical, which tells the story of a nonbinary fifth-grader who must navigate a dangerous journey of bullying, schoolwork and deciding whether to try out for the boys or girls soccer team.

The musical, “The Fantastical Dangerous Journey of Q,” opens at 7 p.m. Friday at the Lawrence Arts Center and will have 2 p.m. and 7 p.m. performances on Saturday. The musical is considered appropriate for an audience 5 years old and up. Tickets for the show are a suggested $10 donation.

After the weekend workshop run in Lawrence, the production will move to New York City for its world premiere at the Theater at the 14th Street Y in December. The musical is produced by The Rebel Playhouse, an educational nonprofit operated by Clara Kundin, who spent much of her childhood in Lawrence.

Kundin, who will portray Q’s mother in the musical, said some aspects of Lawrence’s weekend shows would not be completely finished, including the puppetry, but it was aiming to be as close to a full production as possible.

Kundin said the musical — which uses puppets to create a surreal, magical world — came together because the Rebel Playhouse was interested in a story about bullying. The Rebel Playhouse commissioned Kundin’s mentor Ric Averill, a local playwright and theater educator, to create a story on gender identity. Dax Dupuy, a New York City composer, wrote the music.

“Gender identity is very much a subject on everybody’s mind nowadays … and I see my students are more gender fluid than my generation,” she said. “It’s the beginning of a dialogue, and theater doesn’t really reflect that, especially theater for young audiences.” 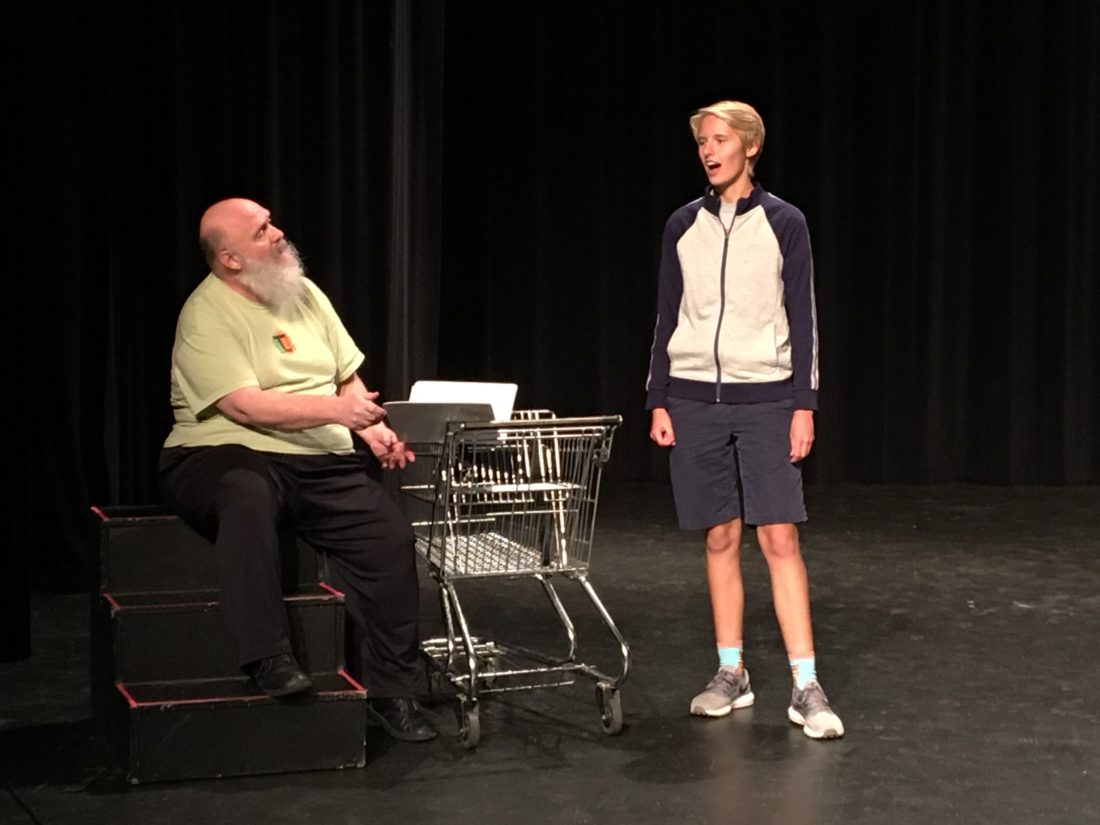 Hazel Youngquist, who is portraying the titular Q, acts out a scene with Steve Fendt during rehearsals of “The Fantastical Dangerous Journey of Q.” Fendt portrays a neighbor who helps Q navigate the world of gender identity.

Coincidentally, Youngquist dealt with an issue that was similar to what Q struggles with in the musical.

“We have a really small school so we had co-ed soccer, but when I was going to join, they cut the team,” Youngquist said. “I really wanted to play soccer still so I was looking at Lawrence teams, but they were all competitive girls or competitive boys (teams) … and I really just wanted a recreational co-ed team.”

Although much older than a fifth-grader, Youngquist, 17, said portraying that age would not be a problem.

Director Sarah Sutliff said the choreography – which ranges from cheerleading, stomping, chanting and childhood games to horror elements – attempts to contrast the innocence of childhood with the danger a nonbinary person often deals with at that age.

“Some songs are lighthearted and playful and other ones are attacking and aggressive,” she said.

When she crafted the choreography, Sutliff did so in anticipation of professional dancers. She said she wasn’t sure how well it would work in Lawrence, but she has been pleasantly surprised.

“It’s been an amazing experience,” Sutliff said. “Our cast is so enthusiastic and down to try anything. We are feeling incredibly grateful for that.”

Averill said he chose to explore the storyline of a child dealing with gender identity because a family member of his is dealing with a similar situation. His niece adopted two boys, but one decided to return for the fifth-grade school year identifying as a girl, he said.

While writing the play, Averill said he spoke with students in Lawrence about its authenticity, and he was surprised by their openness to the story and the idea of a protagonist who identifies as gender nonbinary.

“It was amazing the level of tolerance students had,” he said. “But we also know, talking to people in the trans community, that it’s hard. Any kind of transition or gender question at that age is (difficult).”

Youngquist appreciates how the musical explores an important storyline.

“I think it will be good for people to watch and open their minds about things,” Youngquist said. “This stuff really does go on in the world.”