Regents seek to restore confidence in Haskell after federal investigation, criticize lack of communication from administration 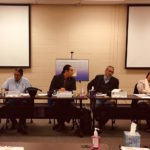 The temporary leader of Haskell Indian Nations University on Wednesday sought to reassure the Haskell Board of Regents that the university was seriously addressing recent allegations of misconduct, even as regents expressed dismay that they had learned about some allegations only through media reports and not from the university itself.

Dan Wildcat, a longtime Haskell faculty member, has been serving as the university’s president for the past 12 days. He took over temporary leadership after the Bureau of Indian Education announced that the current president, Venida Chenault, would be on special assignment for the BIE for up to 60 days.

Chenault’s temporary leave came just days after the Office of Inspector General released its report of misconduct at the school. Wildcat told regents that the OIG’s investigation was prompted by several serious claims, but the OIG found no evidence to validate allegations that grant funds were improperly used to purchase computers or that Chenault had engaged in nepotism.

However, other allegations regarding the mishandling of complaints, a possible sexual assault, the under-reporting of crime statistics and of Chenault reportedly bullying employees remained under review because of additional information that came out during the investigation, Wildcat said Wednesday during the regents’ two-day meeting.

“First, the Clery Act mandatory campus crime statistics were found to have been reported incorrectly and, second, an allegation of a faculty member rape of a student was made to OIG investigators,” Wildcat said.

“With respect to these issues, the campus crime statistics are currently being amended following the recommended process and the alleged faculty member rape of a student has been reported to the Lawrence Police Department,” Wildcat said.

The Journal-World has not been able to discover any further details about the alleged rape.

Wildcat said the university was taking steps to address weaknesses in the overall complaint process for faculty, staff and students.

“As acting president, I want to assure the American Indian Nations and Alaska Native People we serve that Haskell is moving forward with the important work we must accomplish to provide a quality education for our students,” he said.

Wildcat declined to answer questions regarding allegations, saying the review of the OIG’s full report was not yet completed.

Meanwhile, the report came as a surprise to some Board of Regents members. Several said they only learned about it from newspaper reports.

“As a member of an advisory board here to support President Chenault, she had a duty to inform us of the investigation, at least in an executive session. We are expected by our tribes to be representatives of the university, and it only makes sense for President Chenault to prepare us for what is or may become of an investigation of this type,” said Regent Robyn Neswood-Etsitty, representing the Navajo Nation.

Regent Ron Twohatchet, representing the Southern Plains, said this was the most important issue the board was facing.

“There is the fear factor and the bullying factor,” Twohatchet said. “Students and parents are talking about it. I get calls from prominent graduates asking about it.”

All he knew was what he had read in the newspaper, he said, but “I’m the one who gets ‘what the hell is happening?'”

He said Haskell needed to do something to reassure people that the university was a good place to send their kids.

“Let the people know we’re in this together and reassure them Haskell is still a good place to be,” Twohatchet said. “The Board of Regents needs to make a statement and push it out to all the tribes.”

Haskell Student Body President Lindsay Robinson, who attended Wednesday’s meeting, said the misconduct report had been rumored for so long when it came out that it wasn’t a surprise to her.

However, as a student leader, Robinson said she had taken the initiative to let students know whom they can reach out to with any complaints.

The Haskell Foundation is finalizing a gift of $100,000 annually for 10 years. However, the donor’s name is being kept anonymous for now. Fourth-quarter fundraising for 2018 had netted $7,261 from a charity golf event, of which $5,000 was earmarked for student scholarships.

The regents wrapped up their two-day meeting Thursday with a discussion about athletics and teaching vacancies.

The board discussed the possible return of various sports programs to Haskell, particularly the track and field program. The regents decided to gather information on the feasibility of that program returning, and they agreed to hold an executive session by phone to make a decision, before the April 1 deadline, about declaring the school’s intent to participate.

• Wildcat, during presentation of the president’s report, said faculty positions at Haskell were currently only 64 percent filled. He said he would like to see that number at 85 to 90 percent. However, he said that Haskell’s being part of the larger federal government posed challenges that most universities don’t face.

“Haskell is a place unlike any other in the nation with a very unique bureaucratic feature. That said, Haskell is also a place where miracles happen,” Wildcat said. “After 33 years here I have seen so many miracles happen.”