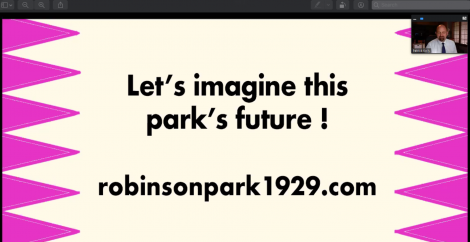 Representatives for the "Between the Rock and the Hard Place" project provided an example of the temporary signs, whown here they plan to place in Robinson Park later this month to raise awareness about their project discussing the future of the park. The park is home to a 23-ton red quartzite boulder that was sacred to the Kanza tribe, but was made into a monument honoring Kansas settlers and does not include any reference to the tribe.

A group hoping to reignite a community conversation on the future of Robinson Park and a boulder located within it will soon be placing temporary signs there to highlight those efforts.

On Wednesday, the Douglas County Commission approved a request from representatives of the “Between the Rock and a Hard Place” project to place the signs in the park later this month. The temporary signs, which will be in the park for three months, are part of the project’s effort to increase interest in the park and the boulder and to tell a more complete story about its past.

Robinson Park, which is at the southern edge of the Kansas River bridge near downtown Lawrence, is home to a 23-ton red quartzite boulder that was sacred to the Kanza tribe, but was made into a monument honoring Kansas settlers, as the Journal-World reported. Despite the boulder’s sacred status to the tribe, the monument does not include any reference to the Kanza people.

Jan. 25, 2020 — Project takes on sacred Kanza prayer rock that Lawrence made into monument to settlers

The planned signs will pose questions to raise awareness of the boulder’s significance to the Kanza tribe and examine whether the park’s name — in honor of Charles Robinson, the first governor of Kansas — should be changed. The signs also include the address for the project’s website, robinsonpark1929.com.

Pauline Eads Sharp, co-leader of the project and a citizen of the Kanza tribe, told the commissioners that the group began its project last fall and held two community meetings earlier in the year to discuss the future of the park. But the coronavirus pandemic shut down their work, and the group is looking for new ways to engage with the community, she said. The group hopes the signs will lead people to the project’s website and help them to reengage in the conversation.

Additionally, Tai Edwards, an associate professor of history at Johnson County Community College and member of the group, said the earlier meetings resulted in many ideas to improve the park, such as placing fuller explanations in the park of the boulder’s history and its importance to the Kanza tribe, among many other suggestions.

Before approving the request, the commissioners thanked the group for sharing the history of the park and the boulder and for working to continue engaging the community in conversation about their future.

“I love some of the ideas that were shared, and I look forward to hearing more about this project,” Commission Chair Patrick Kelly said.