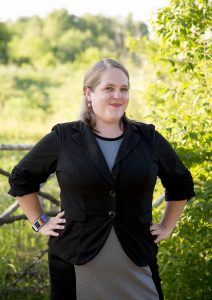 The Douglas County Commission’s decision earlier this year to approve a $29.6 million expansion of its jail after voters rejected such a project in 2018 left Shannon Reid feeling the county leaders were not listening to their constituents.

“I’ve been feeling disheartened with the county’s leadership in remaining stuck in that project despite voters’ voices,” she said.

In January, all three commissioners voted to approve the expansion project, despite many residents speaking out against it. However, the future of the plan is now up in the air, as the commissioners chose to reexamine the project because of the effects the coronavirus pandemic is having on the jail’s space and operations.

Regardless, Reid said she has experience with criminal justice she believes would be helpful to further discussions on the project.

Reid works for the Willow Domestic Violence Center, where she serves as the coordinator for the organization’s court advocacy program. In that role, Reid helps survivors of abuse navigate the legal system, which has helped her understand what barriers people face and what contributes to them being put in jail.

Using that knowledge, she said she would like to put the county’s funding and efforts toward social services — such as behavioral health treatment and recovery — which may help decrease the amount of people who are being put in jail and render the project unnecessary.

“I feel, as a county, we haven’t done much to address some of the solutions because the community has had to spend so much time and energy pushing back on this one issue,” Reid said. “Prevention is where our money should be spent.”

The pandemic is also having an effect on the county’s revenue streams. While the county does not yet know the full extent of the issue, it is preparing to see a decrease in tax revenues because of an economic downturn associated with the pandemic.

Reid said she still has a lot to learn about dealing with the financial end of the county’s responsibilities. However, she said the pandemic requires the county’s leadership to refocus the funds the county does have.

“There needs to be an immediate refocus of funds and looking at things, like the jail expansion project, and realize that money should be immediately shifted to other resources,” she said.

One area Reid said she would like to further invest into is affordable housing, which she said could also serve as a preventive measure to decrease the inmate population at the jail.

Prior to her current position, Reid worked for other nonprofit organizations in New York City and Lawrence, including the United Way of Douglas County.

She has spent most of her life in Lawrence, graduating from Lawrence High School in 2003. She currently lives in Lawrence’s Prairie Park neighborhood with her partner, Bobbi Henson.