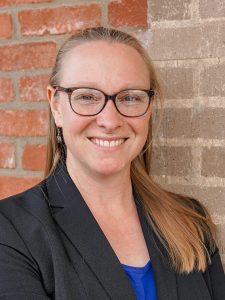 During the 2016 election cycle, Karen Willey said she noticed the fractured nature of politics and realized she needed to do something to bring people together.

Willey, 44, who currently serves on the Lawrence-Douglas County Metropolitan Planning Commission as a county appointee, said she chose to run for the Douglas County Commission this fall so she could try to bring local people together to overcome those fractures and do what’s best for the county.

“How do we take that neighbor-to-neighbor, working past our big fractures, into local policies?” she said, noting she has participated in leadership training. “That is right up my alley.”

Willey is one of two Democratic candidates running for the County Commission’s 3rd District seat. The winner of the Democratic primary for the seat will face off with one of the two Republican candidates in the general election in November.

If elected, Willey said she wants to make sure the County Commission is working with all residents of the county. She specifically wants to make sure communities that have historically not been well served by county policies are included in the conversation.

Getting that done requires a commissioner who not only has strong advocacy qualities, but “hard leadership” skills, she said. While Willey believes advocacy is important, she said leadership is also needed to improve policy and spur progress.

One of those difficult issues is the county’s current plan to expand its jail, which has been controversial in the community. The $29.6 million project was approved by the current commissioners in January, despite many residents voicing opposition to the plan.

Willey said the ongoing coronavirus pandemic has changed the reality of the project. She said the pandemic has given the county another opportunity to consider even more alternatives to incarceration that could make the expansion project no longer needed, adding that she’s “thrilled and excited” about that development.

“My hope is we can depopulate the jail in the near term, in response to COVID, so that we can learn enough that we don’t have to expand the jail,” she said.

She said the commissioners will need to find cuts in the budget, but she also wants to make sure the county continues to invest in “upstream” issues, such as affordable housing and mental health services.

“We have to be really sensitive that if we have a community that’s making less money, then we have to support those people who need to be supported,” Willey said. “But we also have to be sensitive that we are still asking for their tax dollars.”

Willey also has experience dealing with land use issues through her Planning Commission work. She said there should still be discussions between the county and Lawrence about making sure the urban areas grow efficiently. But she is also aware of rural residents who view subdividing and selling some of their land as a financial opportunity.

“We have a lot of cultural tensions around land use in the rural areas, and those (issues) are going to need somebody who can listen to those concerns and understand where all sides are coming from,” she said.