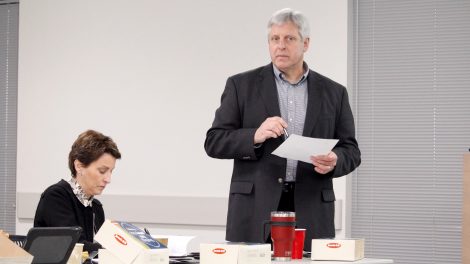 The only person who has served as the coordinator of Douglas County’s Criminal Justice Coordinating Council will soon leave the position to fill another role in the county.

Robert Bieniecki, who has held the position since August 2016, will be the next director of Douglas County’s Emergency Management office. Sarah Plinsky, interim county administrator, announced Bieniecki’s position change during the coordinating council’s meeting on Tuesday.

Bieniecki, who takes over his new position on Monday, will replace interim Emergency Management director Joe Hoelscher, who has been serving in the position since November 2018. Bieniecki said the county published a job advertisement on Friday to find his replacement as coordinator.

Plinsky told the council she expected a strong applicant pool for the position.

“There are a number of people who are very talented and skilled in this area, so I’m anticipating a number of wonderful applicants for that position,” Plinsky said.

Bieniecki took over the coordinator position about five months after the formation of the council. He said he planned to continue helping the council until a new coordinator is selected, which is expected to be in October.

Plinsky thanked Bieniecki for his service in the position, which she said was not easy because he was the first to serve in it.

“It’s incredibly challenging to be the first in any sort of area,” she said. “There has been a tremendous amount of progress made in this organization over the last several years.”