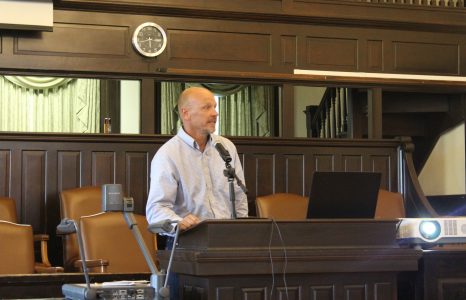 Some county residents whose homes have been repeatedly damaged by flooding may have the opportunity to use federal and local funds to move to a safer area.

But the number of people who will get the opportunity will likely be low, said Chad Voigt, Douglas County deputy director of public works.

“We’re talking about a fairly narrow scope here, but it is an opportunity,” he said.

During its meeting Wednesday, the Douglas County Commission authorized staff to discuss with residents the possibility of buying out properties in the county that are prone to flooding, which could allow those residents to move.

The remaining 25% of the funding could be covered by contributions to the project, including an outside agency helping with funding or the county providing in-kind services, such as demolition of flood-prone structures. Alternatively, homeowners could take a buyout that’s less than the property’s fair market value.

Voigt said that the federal program only has $1.7 million available for all Kansas counties combined, meaning few homes in Douglas County will likely be selected for the program. Additionally, Voigt said, only properties that are in the current 100-year floodplain are eligible for the program.

Prior to the meeting, county zoning director Tonya Voigt, who is related to Chad Voigt, said in a memo to the commissioners that in some areas, the county has seen flooding that isn’t consistent with its floodplain maps. She said the maps have not been updated since the 1990s, which creates concerns that residential development may occur in areas that are prone to flooding.

She said during the commission’s Aug. 21 meeting that some recently built homes near Coal Creek have flooded “two or three” times, but are considered to be in the 500-year floodplain.

In light of the inconsistency, she said her office has reached out to the Kansas Division of Water Resources to update the maps, but the updating process will likely take two years.

Chad Voigt told the commissioners on Wednesday that the homes near Coal Creek would not be eligible for any buyouts because they are not in the county’s current 100-year floodplain.

“There were people who flooded that are outside of the floodplain and they are not eligible,” he said. “That’s obviously a sore spot.”

Chad Voigt told the commissioners that county staff would bring applications for the program to them before submitting them to the state.

In other business, the commissioners approved:

• A $1.2 million contract with Hamm Inc. for road improvement projects on portions of county routes 1029 and 438.

• A $537,000 contract with King’s Construction Co. for a road improvement project on East 1750 Road, also known as North First Street in Baldwin City.