In light of racist graffiti, Douglas County to explore adding murals to underpasses in southern Lawrence 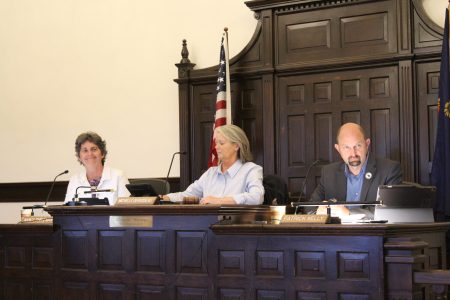 When Lawrence resident Cheryl Lester recently walked on a pathway to the Baker Wetlands Trail in southern Lawrence, she noticed graffiti markings on an underpass that were racist and anti-Semitic.

In response, Lester asked Douglas County to not only remove the markings, but consider adding some sort of public art over them to “turn that ugliness into something beautiful,” County Commissioner Nancy Thellman said.

The county might do just that. During their meeting on Wednesday, county commissioners directed staff to research the feasibility of installing murals on three pedestrian underpasses that had been affected by graffiti.

After receiving notice from Lester, county staff cleaned off the graffiti from one of the three underpasses, which goes under 31st Street, at a cost of $1,300. The Kansas Department of Transportation painted over the markings on the other two underpasses, which run beneath Kansas Highway 10.

The commissioners came to a consensus that adding murals to the walls of the underpasses might prevent such graffiti in the future.

County Administrator Sarah Plinsky said the county doesn’t often work on public art projects, so staff will need to do some research before bringing a possible project back to the commission for approval. For one thing, she said public art like murals could present challenges for maintenance, and that staff would have to ensure that the underpasses could still be maintained without disturbing the art.

Plinsky added that she is aware of studies that suggest murals and other public art can decrease the likelihood of graffiti. She said she would like to provide those studies to the commission so the county can make sure the project will be effective, especially if it uses public funds.

The county will also need to work with KDOT to figure out if it can place murals on the two underpasses that are owned by the state, she said.

That could be complicated, said Keith Browning, public works director for the county. KDOT has already told county staff that state law prohibits art on state highways, but Browning said the county might still be able to talk KDOT into allowing the project. He noted that the mural would not technically be on the highway but underneath the road, in a location that would not be visible to drivers.

Thellman said she hopes the county can make its case to KDOT because the three underpasses are close together and could host a series of murals.

“I was surprised at what a great opportunity it is to do something special,” she said.

In other business, the commissioners approved a $4.1 million guaranteed maximum price to construct transitional group home and apartment facilities on the behavioral health campus, located in the 1000 block of West Second Street.

Mar Lan Construction, which the commissioners previously approved as the construction manager at risk for the project, is contractually obligated to provide a guaranteed maximum price. The funding for the project includes contributions from local, state and federal agencies. Douglas County’s contribution is $400,000, according to county documents.