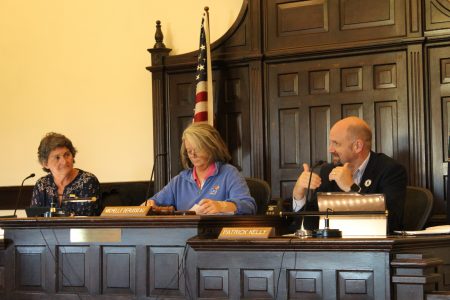 The Douglas County Commission signed off on the implementation of a new city-county comprehensive plan on Wednesday after a discussion about the wording of one of the plan’s provisions.

On a table that shows how many homes can be built per acre of land in certain areas of the county, the document says that rural areas can have up to 1/3 of a home per acre. Commissioners said that phrasing would be confusing to the public and that it would have been clearer to say that 3 acres of land were needed to build a home in rural parts of the county.

However, the commission decided that since the wording was technically accurate, it wasn’t necessary to send the plan back for approval from both the Lawrence-Douglas County Metropolitan Planning Commission and the Lawrence City Commission. Planning Manager Jeff Crick said that if the county had made a change, it would have taken weeks or even months to get those approvals.

“I can’t support the idea of holding up this plan for an accurate piece of information,” Commissioner Nancy Thellman said. “I don’t think that’s a significant enough change to trigger a whole new process.”

In addition, Commissioner Patrick Kelly pointed out that the county was already considering zoning changes that could increase the amount of land needed to build a home in the rural part of the county.

Crick told the commissioners that any change to the zoning regulations would likely trigger an amendment of the plan to make sure it was aligned with current codes. He said the wording of the table could be edited then.

Before joining the other commissioners in approving the plan, Commission Chair Michelle Derusseau said she didn’t like the fact that any changes would hold up the document’s approval by weeks or months. She said the approval process, which is dictated by state law, would have put commissioners in a bind if they wanted to change the plan.

“I don’t want this board to make a decision based on how long it takes to get it right,” Derusseau said. “I don’t ever want us to not be able to give our two cents on something just based on the fact that it’s going to take a couple of months to fix it.”

With the county’s approval, Plan 2040 will replace the former comprehensive plan, Horizon 2020. The City Commission signed off on the plan on Oct. 1.

In other business, the County Commission voted to apply for federal funds to buy out three flood-prone properties in the county.

Chad Voigt, Douglas County deputy director of public works, previously said the federal Hazard Mitigation Grant Program offers federal funding to cover 75% of a property’s fair market value and project costs, such as required asbestos inspections. The remaining 25% would be paid by the owners or through county in-kind services, such as demolition. No county funds would be used for the buyouts, Voigt said.