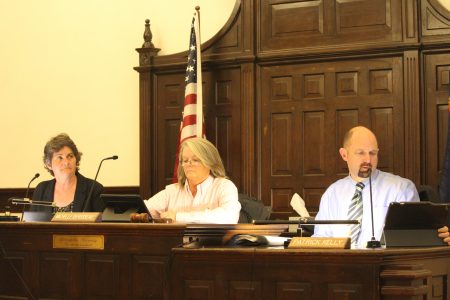 Douglas County Commissioners review a conditional use permit application for a open-storage lot on property near Clinton Lake during their meeting on Wednesday, Nov. 20, 2019. The commissioners voted 2-1 to award the permit.

A rural homeowner near Clinton Lake will be allowed to operate a boat and RV storage lot on her property, but the Douglas County Commission took steps Wednesday to make sure bus-like RVs would not be permitted.

The commission on Wednesday approved, with a 2-1 vote, a conditional use permit that will allow Connie Robertson to rent out 10 spaces for boats and RVs on her 6.3-acre property at 1072 North 1200 Road. The open-storage lot, which will be 75 feet by 125 feet, will be located behind her home.

But the commissioners added some extra conditions to ensure that the storage lot would only be used for standard boats and RV campers. The conditions prohibit certain classes of RVs and cap the maximum length of stored vehicles at 30 feet.

Robertson said she wasn’t planning to operate the lot outside of those conditions to begin with, but Commissioner Patrick Kelly said they were important to include in the permit to make sure a future property owner would have to operate under them as well.

The commission also added a condition that would require Robertson or future owners to install more screening, such as trees, to the property if the current screening is removed. The current plans call for the storage lot to be screened from view by Robertson’s home and vegetation around the property.

Commissioner Nancy Thellman was the lone commissioner to vote against awarding the permit. She said she shared concerns previously raised by Robertson’s neighbors, who argued that the plans wouldn’t fit with the mostly residential neighborhood and that large vehicles turning in and out of the property might cause transportation problems.

“I’m lacking some of the comfort I need on (those issues),” Thellman said.

However, Kelly said he did not share those concerns and Commission Chair Michelle Derusseau said she was comfortable approving the permit with the added conditions.

The commission also unanimously approved awarding a second conditional use permit that allows Robertson to rent out the basement of her home to guests.

The basement contains two “sleeping rooms” that can be used for vacation rentals, according to Robertson’s permit application. She said in the application that she considered the basement as “extra living space in my home” and she plans to rent them out to guests through Airbnb.