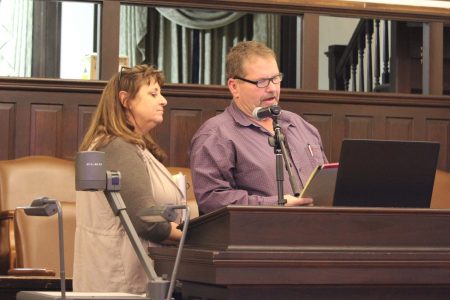 Eugene George, right, and his wife, Laura George, left, present their updated application for a conditional use permit to build an event center on their rural land during the Douglas County Commission meeting on Wednesday, Nov. 13, 2019.

A rural Douglas County family now has the authority to build and operate an event center on their land, despite some neighbors voicing opposition to their plans.

The Douglas County Commission unanimously approved issuing a conditional use permit to Eugene George and his family to build the event center on the family’s 80-acre property on 1500 Road, about half a mile north of North 900 Road.

Once built, the 7,920-square-foot event center would be operated from 8 a.m. to 10 p.m. Sunday through Thursday and from 8 a.m. to midnight Friday and Saturday. It would allow for a total occupancy of 375 guests.

The commission previously considered awarding the permit in August, but voted to defer the request until a later date after several neighbors of the property voiced concerns, such as that the event space would create noise in the rural setting. Some neighbors again spoke out against the family’s plans during the commission’s meeting on Wednesday.

“It is absolutely unjust, damaging, burdensome (to) our established rural life and environment,” said Erin Callahan-Halpin, whose family owns property adjacent to the Georges’ land.

However, Commissioners Patrick Kelly and Nancy Thellman said they were happy with the Georges’ proposed changes in their new application.

The family also relocated the proposed event center to move it away from a pond on the property. County staff said there were concerns about the pond’s integrity and that it would need extensive work to be viable for the plans. The event center is now located about 1,000 feet away from the pond and no longer considers the pond to be a major feature of the project.

“Notwithstanding the negative comments from neighbors tonight, I was pleased with how the Georges responded to the commission’s concerns,” Thellman said. “I came away feeling that (the Georges) had really honored our request to go back and work a little harder.”

Eugene George, who has used the property for livestock farming, told the commission in August that he wanted to build the event center to make sure he could create a successful business that would keep the rural land in his family for generations to come.

“This is a way I can have my children take over when I’m long gone and keep the farm going,” he said in August.

In other business, the commission approved awarding a contract worth almost $67,000 to Lakeview Excavating Inc. to demolish four vacant buildings at 146 Maine St.

The county is removing the buildings, which are former Lawrence school district facilities, because it plans to build its proposed behavioral health crisis center at that location.

County, health and housing officials recently kicked off construction on the housing portion of the campus, which is directly east of 146 Maine St.

Including the county’s contingency funds, the overall cost of the demolition project is slated at $77,000.